25 October 2022 | by Mike VE9KK  |  Share |  Tweet |  Leave a Comment (0)
Autumn is here along with the leaves all over the lawn, once or twice a week I take the lawn mower out with the grass catcher on and vacuum the lawn of leaves. Doing this got me thinking of winter and my Hustler 4BTV antenna regarding the snow. I did some internet searches and some left the base alone while others covered it. The conscience was that snow does not bother the vertical with regards to performance but I was concerned about the connections and isolation balun.
I decided to make a box to cover the base section of the antenna but one that could easily come off in case of a storm and I had to lower the antenna. I wanted something simple, that would stand up to the weather and remove without issue. I came up with a cover made of wood and only 4 deck screws had to be removed to remove the box cover from the antenna for storage. The top also has 4 deck screws it can be removed for access to the antenna if it has to be taken down due to high winter winds.

I also made the box with room on the side as I knew I would be adding the choke balun to the mix. It's going to be painted white to mix in with the snow when it comes and I will keep on top of shovelling the snow on and around it just in case the antenna has to come down due to windy weather.
As said before to remove the box ultimately all that has to be done is 4 deck screws removed and the side cover and half of the top cover comes off and the box can be removed and stored for the summer. In case of poor winter weather, 2 deck screws are removed and half of the top cover is removed and the antenna base is exposed.

To take the antenna down I was going to purchase a tilt base but to tilt the antenna because of its length there were obstacles in all directions. What I do (as I did this during hurricane Fiona over the summer) is the loosen the lower section screw clamp then the complete antenna can be removed from the base section. I then loosen the screw clamp at the top of the 20m trap and separate the antenna. This splits the antenna in half and can be stored in the shed until the storm has passed. As with any vertical antenna you have to fine-tune the SWR by adjusting the tubing. This can get very fussy and time-consuming and once done it's best not to tweak it. The tubing section at the top of the 20m trap just bottoms out and is not meant to be adjusted. Therefore when the antenna goes back together this section bottoms out and the SWR on all bands is not affected. This was proven during Fiona when the antenna came down and went back up again without SWR changes.
The final picture shows 1/2 of the top cover removed and the lower screw clamp is exposed and can be loosened for the antenna to be removed. The cover goes back in place. 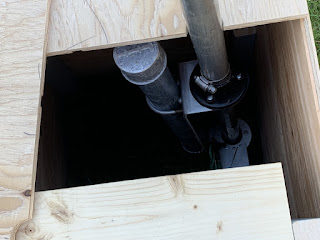