How a Cross-band Repeater Helps My Family

Yesterday my son, Antonio, got his call sign: KDØSGL! He’s been putting his HT to use, too. It came in handy yesterday evening when we were at opposite ends of Walmart, and this morning he took it along with him when he went to mow grass for a widow. My daughter dropped him off along with the lawnmower, and I waited to hear Antonio on the radio so she could go pick him up when he finished. We have a couple of “private” channels programmed in our radios for simplex on 2m and 70cm with a sub-audible tone set for CTCSS. 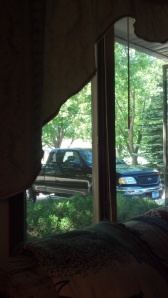 My own personal repeater, sitting in the driveway!

The thing is, our handhelds don’t go quite that far if one of us is indoors — and I was. No problem! Once my daughter returned with the pickup, I just set my new (used) Kenwood TM-V71A to cross-band repeat between our two channels. It is as simple as turning it off and turning it on again while holding down the [TONE] button, so it only took a second. When my son finally called me, he was sending to the high-gain antenna on my pickup on 2m and being rebroadcast on 70cm at 50 watts. Needless to say he boomed in on my handheld on 70cm when he finally called, even though I was indoors. And when I replied on 70cm, the Kenwood in my pickup rebroadcast my signal on 2m at 50 watts, booming in on his handheld. He would have to have been mighty far away for us to have had trouble communicating.

One thing I like about the Kenwood TM-V71A is that you can set it to identify every 10 minutes using morse code when it is in repeater mode. I have it set to do just that. Sure enough, while I was working indoors waiting for Antonio to call, I heard “NØIP/R” a couple times in morse as my own personal repeater announced itself.

My friend tells me to watch out lest I drain my battery doing this, so I’m being careful how much I use my mobile radio in cross-band repeater mode. But for short periods for just my son and I, it is the perfect solution to extend the range of our handhelds.

Todd Mitchell, NØIP, is a regular contributor to AmateurRadio.com and writes from Minnesota, USA. He can be contacted at [email protected].

3 Responses to “How a Cross-band Repeater Helps My Family”