Years ago, that was the title of a song by Buster Poindexter.  That title is very apropos for this coming weekend.  Just to give you a little of our flavor – here it is 10:20 PM and it’s still 82F (28C) outside.  When I got to my car to come home from work, the Jeep’s thermometer read 101F (38C). I thought to myself, “Yeah, that’s because the car was sitting in the sun, it will cool down as I move and I’ll get the real reading in a few minutes”.  Ten minutes later, the temperature did indeed drop, all the way down to 100F. One degree!

This weekend is going to be brutal as this is supposed to last right through Monday. It’s a good thing we had the air conditioning fixed last week. At least we’ll be able to sleep in relative comfort. No matter how bad it gets, though, in my mind this is better than 6 inches of snow and 22F outside.  I’ll deal with this any day of the week!

Two cool (pardon the pun) events took place tonight.  First, yours truly, one of the most inept people on the face of the Earth when it comes to figuring out COM ports and such stuff, managed to download the KX3 utility from Elecraft. Not only that; but I got it to work!  I downloaded from the Elecraft server and then uploaded into my KX3, the latest version of firmware. And I discovered that using the KX3 utility, that you can enter a start up banner. So now, when I turn the rig on, where the secondary VFO display normally is, you see “W2LJ’s KX3” for a few seconds before that changes over to the normal VFO display. 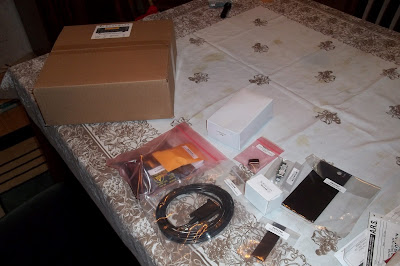 I completed the K3 inventory. Everything was there! Well, just about everything – I am missing three #6 split ring washers.  But I can pick those up (or an equivalent) at a local hardware store. None of the screws were missing.  In fact, there was OVER the amount needed and that does NOT include the extras that can be found in the Elecraft spare hardware bag. The picture above does not do the situation any justice.  When I opened up that big cardboard box, it was jam packed with bags, envelopes, static bags and other things.  By the time I was done, the entire table was covered with Elecraft goodies – you couldn’t even see the table cloth.

I am hoping to start the build tomorrow night after all Saturday’s chores are done.  I am also hoping for a chance to run over to the park on Sunday with the KX3 a battery and some wire,  If I get the opportunity, I will post myself on QRPSPOTS and maybe we’ll run into each other on the air!

By the way, we’re up to 75 Skeeter numbers given out for the NJQRP Skeeter Hunt to be held on Sunday, August 12th,  I’ll be handing out numbers right up to the day before; but don’t be part of the last minute rush! Get yours today by sending an email to [email protected]