Having fun on the "Magic Band"

2 June 2016 | by Andrew MØNRD  |  Share |  Tweet |  Leave a Comment (0)
In April I installed a second-hand HB9CV for 6m, primarily for use in the UKAC VHF contests but I hoped to use it during the upcoming sporadic 'E' season. 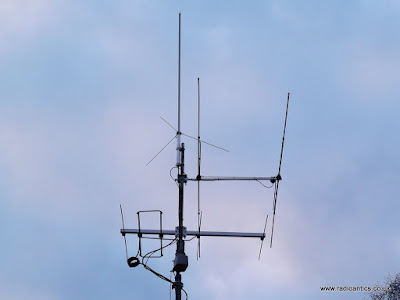 Still a relative newcomer to the hobby (only licensed at end of 2013) I had little experience of the 50MHz/6m band and have been mostly met with static whenever I did turn the dial to have a listen but happily that has changed in the last few weeks.

I knew that 6m can be an interesting, unpredictable almost unique band.  Being at the lower end of the VHF spectrum it exhibits the usual characteristics of VHF communication, mostly short range line-of-sight contacts since 50MHz is usually well beyond the maximum usable frequency (MUF) for normal 'F-layer' ionospheric propagation utilised by the lower bands. However solar activity and other factors can trigger other types of propagation, in fact the band can support just about every form of propagation possible and is the main reason why it has become known as the "Magic Band"

One interesting form of propagation is sporadic E, or popularly referred to as Es. Small clouds of unusually ionised atmospheric gas form in the lower E-layer of the ionosphere (located at altitudes of  90 to 160 km). These clouds 'bounce' the radio waves allowing long-distance communication at VHF frequencies, sometimes multiple hops are possible giving extreme DX. One advantage of sporadic E over other forms of propagation is that it allows low-power QRP communication. As its name suggests, sporadic E is not a normal occurrence but can happen at almost any time. It does display a seasonal pattern with activity peaking in the summertime most noticeable in mid-to-late June.

I had turned the antenna to the East and have been running WSPR on and off over the last month on 6m with no luck, just the odd spot from the UK. I was in the shack one Saturday evening and was tuning around on 6m and heard some Italian stations calling CQ on SSB. I tried my luck and answered (using 50W) and was amazed to be heard, working a couple of stations in quick succession then suddenly the opening closed mid contact with another station. I was hooked!

Over the past few weeks I have caught a few more openings and have managed to work (in no particular order) Latvia, Croatia, Lithuania, Slovenia, Czech Republic, Slovakia, Serbia, Italy, Germany, Switzerland, Poland, France, Spain, Austria, Canary Islands and Finland - using a combination of voice on SSB and the JT65 digital mode.

Using JT65 has been particularly interesting since it allows me to 'remote operate' from work otherwise I would miss most of the 'Es'. Being able to monitor the waterfall and see the signals gaining and falling in strength during the minute long transmission is particularly fascinating.

Using the PSKReporter website I can see the location of all the stations I could hear and was being heard by. This map shows activity over the couple of hours on the 26 May using just JT65. 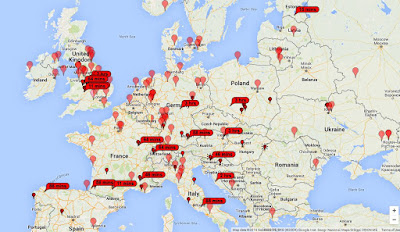 I have joined the UK Six Meter Group (UKSMG) to find out more about this "magic band" and their website is full of lots of information and resources along with the magazine Six News for subscribers.