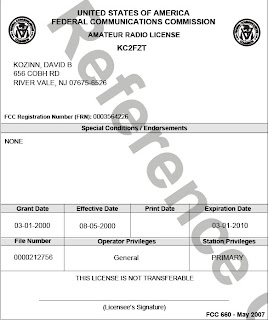 Today is the 10th anniversary of me getting my first ham radio license, which was officially issued by the FCC on March 1, 2000. My original callsign as issued was KC2FZT, though I changed to the current vanity callsign (K2DBK) later that year, just before I upgraded to my General license. At the time I was licensed, I had to take both the old Novice and Technician written tests to receive a Technician class license. (Major license restructuring occurred on April 15, 2000, when they reduced the number of license classes from 6 to 3 (Technician, General, and Amateur Extra). I didn’t take a Morse code test at the time (which would have given me “Technician Plus” privileges), but I did take a 5wpm test later that year as part of the General Exam. And no, I didn’t have to go to the FCC office in New York City as used to be the process, I took my exams in Joyce, KA2ANF‘s basement from a dedicated group of Volunteer Examiners.

I first got interested in getting onto the HF bands after participating in Field Day that year. Alan, KG2MV, helped me work the 15m phone tent (and yes, the bands were a whole lot better then, so we were pretty busy) and I got hooked. In addition to friends in my radio club (the 10-70 Repeater Association), I also had a lot of encouragement from a co-worker Jim, WK8G, and of course from my good friend Larry, N4VA, who continues to encourage me today.

Reflecting back on 10 years as a ham, there are a number of things that I’ve come to realize are why I so enjoy the hobby. There is always something new to try, be it a new digital mode, a new contest, or operating from a new location, although you can always go back on something you already know well and with which you are comfortable. The hobby is there when I’m ready for it; I don’t have to depend on good weather or some particular location. And of course, there are good friends and good times for those of us drawn together by a common avocation.