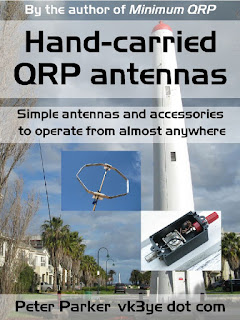 Whether through choice or circumstance, more radio amateurs than ever before are enjoying portable operating.
Suitable equipment is widely available but what about antennas?  Manufactured antennas exist but only some suit lightweight portable activity.  And, it’s easy to overpay for something that’s too heavy and too lossy for successful QRP.
Hand-carried QRP antennas takes the mystery out of portable antennas.  After inviting you to assess your needs, it discusses the pros and cons of popular types.  Its style is brisk and practical with almost no maths.
Many ideas for cheap but good materials suitable for portable antennas are given.   Beginners and those returning to radio after a break should especially find this section handy.
Finally there’s construction details on a variety of simple but practical antennas and accessories suitable for portable operating.  All have been built and tested by the author over almost 30 years of successful QRP activity.
Hand-carried QRP antennas is an ebook readable on most devices.  It’s the author’s second book, following on from the top-selling Minimum QRP, released in 2015.
ABOUT THE AUTHOR
Peter (mis?)spent his youth at rubbish tips, taking apart given radios and TVs and building electronic projects that mostly did not work.  He avoided soldering until figuring out that new solder works better than reusing solder from terminal strips in valve radios.
Milestones included the construction of a crystal set in 1980, discovering shortwave broadcasting on a valve receiver in 1981 and a simple ‘electronic organ’ in 1982 from a Dick Smith Fun Way book.  Hours were spent putting wires into springs on a Tandy 150-in-1 electronics set.  Amazingly some wires could be pulled out and the project would still sort of work with only half the parts in circuit.
Two back to back AM/shortwave radios led to the discovery of amateur SSB activity and a novice licence in 1985.  The following year was spent building transmitters no one heard.  A one valve crystal controlled CW transmitter from the 1973 ARRL Handbook provided the first contacts – mostly CW/SSB crossmode on the 3.579 MHz TV colour burst crystal frequency.   The value of frequency agility was an early lesson and various VFOs were built, most of them drifty.
The 1990s brought more bands, more modes and smaller gear.  Projects included a 7 MHz VXO CW direct conversion transceiver, 2m FM portable transceiver, and a 14 MHz CW transmitter for Cycle 22, then near its peak.  Later favourites included HF DSB and SSB transceivers (often using ceramic resonators, ladder crystal filters, NE602s and BD139 transistors) and phasing SSB equipment.
Limited space led to experiments with magnetic loops and HF pedestrian mobile.  The joys of the latter (along with the perils of a trailing counterpoise) were first discovered with a converted Johnson Viking CB on 28 MHz.  This was mounted in a carpeted chipboard box with battery and 1.5 metre whip.  A move to a bayside suburb brought further HF portable and pedestrian mobile activity which remains an interest to this day. 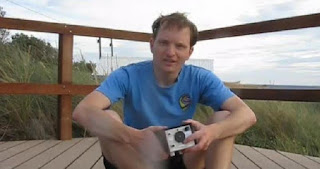