Had a wonderful time today

17 January 2016 | by Larry W2LJ  |  Share |  Tweet |  Leave a Comment (1)
My good friend Dave Hackett KD2FSI, fellow South Plainfield Amateur Radio Club member, decided to conduct an NPOTA activation.  Yesterday, Dave posted on Facebook that he was going to travel up to Morristown, NJ to activate Morrsitown National Historical Park, HP28.  I asked (tongue-in-cheek) if visitors would be welcome, and Dave answered in the affirmative, so I knew I had to get up there today.

If you saw Dave's setup, you would swear that you died and went to Ham Radio heaven.  Dave recently purchased a minivan, which has become a custom outfitted portable communications center. Dave has hand crafted a wooden bed frame, with storage underneath that allows him to cart along everything he needs for portable Amateur Radio operations. If the need arises, Dave can operate quite comfortably from either inside or outside the van. He is equipped for just about any eventuality that you can think of, and if need be, he can "camp out" in semi-luxury as needed.  I should have taken pictures for this post, but I was so excited about helping to activate an entity for NPOTA that I plumb forgot!  (See my update below)

I got to the park shortly after Noon.  It's been years since I've been up to Jockey Hollow and I took a few wrong turns.  I ended up driving through Harding, NJ. Wow! Talk about seeing where the "1%" lives. What estates!  But I digress.

I got to the Jockey Hollow parking lot and Dave was already good to go.  He had his hybrid homebrew/commercial Buddipole on a painters pole at about the 15 foot level.  He had just finished conducting a run when I drove up, so he was ready to take a break and stretch his legs for a bit when I arrived. We chatted for a bit while I admired his set up.  Dave was using a Yaesu at 100 Watts off a deep cycle marine battery, and it was doing him in good stead.

Shortly after, we got back down to business.  Dave folded down the seat, so I could set next to him (very comfortably) on his padded bed frame/bench seat/storage cabinet. I offered to log for him while he took the microphone. Dave called "CQ NPOTA" for a bit and we had a few bites.  Then I decided to whip out my cell phone, bring up DX Summit and spot him on the cluster.

Quite literally, all Hell broke loose!  It was like standing next to a dam when it decided to burst. We were at the business end of a pileup and were having the time of our lives.  A little over an hour later, Dave decided to take another break, so I operated station KD2FSI for a few more QSOs, while he stretched his legs.  When things quieted down, we both took a break to discover that we had made over 100 QSOs in that short amount of time.  We worked all up and down the East coast and as far West as Arizona and New Mexico.

While Dave was operating solo, he also worked into Canada, the Netherlands and Belgium, I believe. It was a great time and I'm very grateful to Dave that he let me be his wingman for the day. As far as Amateur Radio goes, Dave is still considered a "rookie" as he is licensed for less than three years. Let me tell you, Dave is no rookie!  Dave has taken to HF operating like a bird to the air or a fish to the water.  He is completely at home behind the microphone for phone operations and behind the keyboard for digital operations.

And, oh yeah, he's also learning to get comfortable behind the key for CW operations. I'm hoping that he'll really be comfortable by Field Day!

Dave posted some photos to the SPARC Facebook page, so I am going to do a little cross posting here, so you can see his wonderful set up. 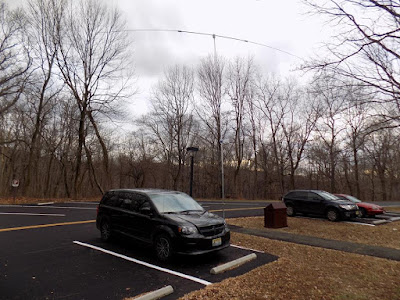 Dave's minivan parked on his homebrew mast holder.  The mast is an extendable painter's pole. I'm guesstimating about 15 feet high.  His Buddipole is a hybrid of homebrew and commercial W3FF parts. By his outing yesterday, it was obvious that Dave's concoction is a huge success! 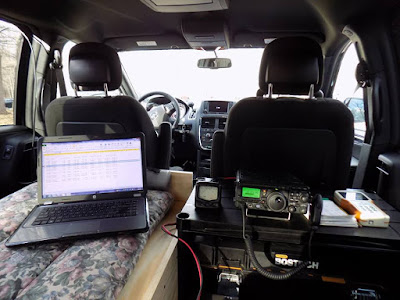 From the back of the minivan looking forward.  Dave's laptop is sitting on his handcrafted bedframe/storage unit. As you can see, it also serves as a desk.  He had only a thin cushion on it, as he was not spending an overnight at the park. For sleeping purposes, Dave has a much thicker and comfortable memory foam pad that his son gave him for Christmas.  This thin pad was just the thing for using his bedframe as a bench when Dave was running stations while I logged for him.

One Response to “Had a wonderful time today”