3 January 2016 | by Steve VE7SL  |  Share |  Tweet |  Leave a Comment (0)
I recently received an interesting note from Daniel, DF8UO, describing his GW3UEP transmitter modifications:
Hi Steve,
I have seen on your Website, that you are also a MF/LF fan and builder of GW3UEP QTX. I build the version with 2 IRF540 as you proposed and the same version with 2 IRF630. As I bought some time ago a PSU with can be regulated from 1V to 60V and max 10A (it is a Manson HCS 3404) I made some measurements on both version. Find attached an Excel with the measurements I made, if you are interested in.
If you use the IRF540 version you can see that if the power exceeds 100 W, the efficiency goes down, as the IRF540 is only specified for 100V.
Currently I am using the IRF630 version running at 300W without problems. 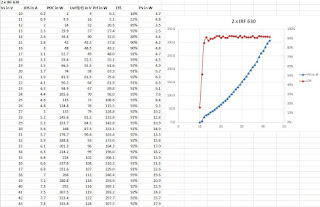 From Daniel's test data, it looks as though the IRF540's are quite happy as long as you keep the transmitter at 100W or less ... anything higher would certainly benefit from the switch to IRF630's as the high efficiency is maintained at least to the 300W level. Something at this level would no doubt benefit from higher-voltage capacitors and heavier inductors as well as a little more heatsinking, enough to shed at least 25 watts of heat between the two FETs.

Daniel drives his amplifier with an Ultimate3, followed by a 10db attenuator, a squarer and into the totem pole driver stage. His own version uses toroidal inductors rather than the original air wound coils. 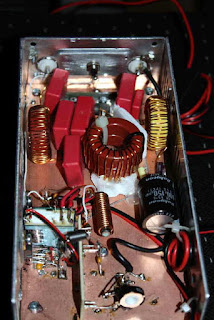 A pair of GW3UEP amplifiers using IRF630's at ~40V into a small power combiner, should provide ~550W of useful output at >90% efficiency ... more than enough power to do some serious work on 630m.
Steve McDonald, VE7SL, is a regular contributor to AmateurRadio.com and writes from British Columbia, Canada. Contact him at [email protected].