I’ve been spending a few hours playing around with a FUNcube Dongle Pro. There was a lot of excitement about this project a couple of years ago when it started. In order to get one you had to be quick off the mark on Ebay. I never succeeded, then I got ill and then I forgot about it. This one was passed on to me by a friend who successfully purchased one but never used it.

I started off by following the instructions in the user manual. I followed this by installing and setting up a complicated-looking SDR program called Spectravue. I was baffled by most of this program’s settings and I wasn’t sure if it worked.

What I should have done was try some of the SDR programs I installed when I was playing about with USB TV dongles at the beginning of the year. I started SDR#, selected the FUNcube Dongle from a pull-down list, clicked Start and it just worked! 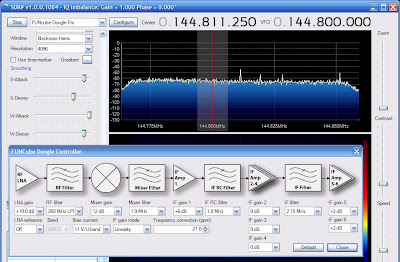 Simon Brown’s SDR-Radio worked as well, and with equal ease, though as luck would have it I tried it on the very day that the (free) licence key for the program expired. This appeared to come as much of a surprise to Simon as everyone else. As I type, Simon has just uploaded a fix which I have yet to install.

I thought I would try using the FCD as an ADS-B receiver which I did with the TV dongles but I soon discovered that I can’t. The FCD looks like a budget USB sound card to the SDR software, so its bandwidth is restricted to 2 x 48kHz. The digital TV dongles can transfer a much wider bandwidth. This is noticeable if you try to receive Band 2 FM radio – through the FCD the signal sounds distorted on peaks because the bandwidth isn’t quite wide enough for FM stereo which needs a full 100kHz..

It will be interesting to use the dongle with the FUNcube 1 satellite when it gets off the ground later this year (we hope!) In the meantime I’ll use it to watch for Sporadic-E in the VHF band.

One Response to “FUNcube Dongle”