In honor of Holy Week, I will be charitable and not refer to certain ops the way I might normally be so inclined.

I had two nice rag chews on 40 Meters busted up by inconsiderate ops.  The first QSO was with Howard K4LXY.  This was a 2X QRP QSO. Howard was using his KX1 and I was using my KX3. We were going at it pretty well until a certain W2 station (I will refrain form posting the suffix, although I certainly made note of it) came on frequency and called CQ right on top of us. Before that, another station came on frequency, but had the decency to “QRL?” and politely moved when he discovered that there was a QSO in progress.  Unfortunately, this W2 station didn’t bother with such niceties.

The second QSO was with Hank K1PUG.  Hank had answered my CQ, which I sent AFTER listening to the frequency to make sure it wasn’t being used AND after sending a “QRL?” with no response. Our QSO was evolving into a rather nice discussion about the Ten Tec equipment that Hank was using.  Again, this chat was going nicely until some digital mode (not familiar with the sound enough to know which mode it was) user came on and just put the complete kibosh on things. For crying out loud, we were on 7.035 MHz.  Can’t digital stations stay above 7.060 MHz? It’s bad enough when they practically come down to the Extra portion of the band on contest weekends. Can’t they leave CW ops in peace during a weeknight?

At the risk of sounding like a curmudgeon OF …… back in the 90’s when I was doing A LOT of digital mode work, we made sure to stay above 7.060 MHz on 40 Meters – EVEN during contest weekends.  Has civility been completely thrown out the window?  Man, I hate sounding like some bitter old man; but now I think I can begin to understand how they get that way.

Anyway, I jumped on over to 30 Meters to escape the madness and worked HC1MD/HC2, Dr. Rick Dorsch in Ecuador.  Rick is operating from the Fallaron Dillon Lighthouse through Friday, according to his QRZ page. 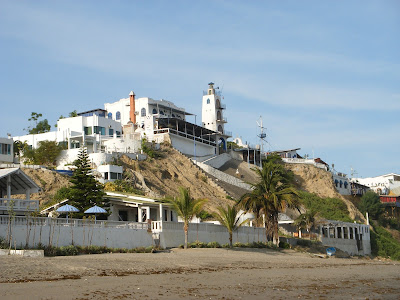 Although Dr. Rick was 599 here, I didn’t know whether or not to expect that I was going to be able to get him with QRP.  For some reason, I don’t always have the best of luck working South American stations.  I guess maybe my antennas don’t radiate all that well in that direction.  But I did indeed, work Dr. Rick with 5 Watts with the 88′ EDZ antenna.  According to the QRZ page, Dr. Rick was using a Yaesu FT-857D at 100 Watts to an Outbacker vertical.  When I read that after our QSO, I was even more impressed! I wonder if he’s an ear doctor, because he has to have a good pair of ears to have picked me out of the pack!

And so ends my night.  Have to turn in so I can get up and go to work tomorrow.  But Friday is a day off as it’s Good Friday.  The bad news is that W3BBO e-mailed me today to inform me that the Easter Island DXpedition ceased operations today.  Another one missed!