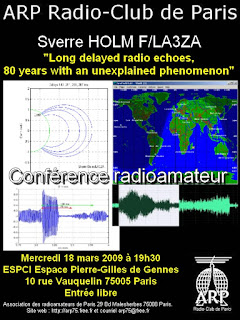 Laurent, F6GOX, who is one of the primary forces behind the ARP, Radio-Club de Paris, has written a nice little French-language presentation of me since I am a former member of the club. It also includes my interest in Long Delayed Echos (LDE).

Here he also talks about the presentation I gave for the Paris club of radio amateurs on 18 March 2009 on this subject during my year-long stay in Paris. That was a very nice evening which I remember with pleasure.

I also talked then about the interest that the French general Gustave Ferrié (1868 – 1932) took in this phenomenon (The link is in French, but read about Ferrié here in the English Wikipedia). There were French studies of LDEs in Indochina, Senegal, and Mauretania, French territories at the time, which he played a major role in.