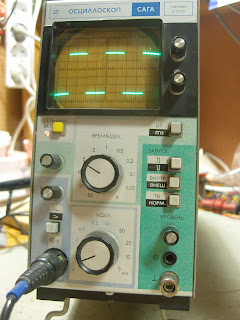 I visited Riga, Latvia with a youth group which we as a family were involved with in 1992, and there I stumbled upon a Soviet oscilloscope in a department store. It was from the neighboring country, Lithuania, and was manufactured in Vilnius, the capital. The markings say what I guess means “Made in the Soviet Union”. At least it says CCCP in the upper right-hand corner. I remember these letters very well as all Soviet athletes used to have them on their backs.

The oscilloscope came with full documentation, even with a bilingual manual. I had grown fond of this oscilloscope as it was lightweight and simple to use once I had learned what the Russian markings meant. It is a typical instrument for TV-repair with a 7 MHz bandwidth.

Now after 20 years, I was therefore very sad when it malfunctioned. This was the time to test if the manual was helpful or not. The symptom was that the beam no longer could span the whole screen in the X-direction. Even with the Horizontal positioning all the way to the left one could barely see the beam.

I opened the bilingual manual only to discover that the two languages were Russian and Lithuanian! 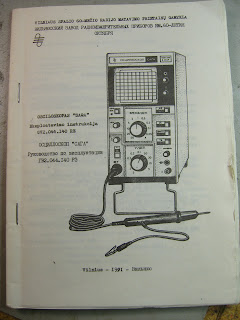 But lucky for me, the schematic was similar to what I am used to and quite readable. It even contained PCB-layouts.

It showed two high-voltage transistors, KT940A, in the last stage of the horizontal amplifier. One of them turned out to have an open emitter-base junction. Specs that I could decipher from Russian data sheets on the web showed that KT940A is NPN, 300 V, 90 MHz. I found that I had a 2SC2611 lying around with similar specs. It even fitted the same footprint.  So now the oscilloscope is back in business again.

The oscilloscope is called Saga – осциллоскоп “Сага” – osciloskopas “Saga”. It would be interesting to learn if this factory is still in business. Were they able to diversify into other areas in these very interesting last 20 years of independence for Lithuania, and indeed all three Baltic states, or have they vanished?