24 April 2017 | by Andrew MØNRD  |  Share |  Tweet |  Leave a Comment (0)
We ventured out to the Lincolnshire Wolds again on Saturday and spent most of the morning taking in a fabulous little 5 mile circular walk from the village of Wold Newton with the wife finding over twenty geocaches along the way. 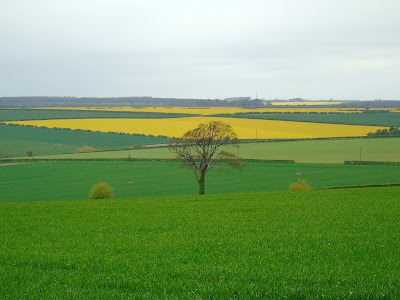 After last weekends disappointment I had purchased a new Baofeng UV-82L dual band for the princely sum of £27 from eBay to replace the suspect UV-5R. It certainly seems more sensitive when receiving and the transmit audio is loud and clear.

With the 'flower-pot' antenna in the rucksack I spent the walk monitoring the local repeaters (and could hear the regular idents) as well as the calling channels. I was putting out the odd call (with little success) when we stopped to allow the wife to search for the geocaches.

However I wasn't disheartened as the plan was to spend the afternoon on Normanby Top, the highest point on the Lincolnshire Wolds trying to activate the summit for SOTA.

I had been spurned on to have a go at an activation after watching a video of  Michael Sansom's (G0POT) presentation on the SOTA scheme for the Chertsey Radio Club. The video is available online here and Michael has written an excellent companion introduction to SOTA on his website http://peanutpower.co.uk/sota

After finishing the walk we drove the short distance stopping to collect more geocaches along the way and as we neared Normanby Top we stumbled across Thoresway Motoparc where they were busy practising their motorbike scrambling skills and I spent a while taking some action photographs from the side of the road.

But I digress, Normanby Top, as I've said is the highest point on the Lincolnshire Wolds and the actual summit has an Ordnance Survey triangulation pillar as indicated on the map but it on private land. The SOTA rules allow someone to activate a summit by being within 25m vertically of the high point, this means the activation area for Normanby Top is potentially huge as it is more of a plateau than a steeply defined hill.


To the South of the summit is a road with an air-traffic control radar station. We parked up near this impressive structure to have some very late lunch (time had flown by)

I could have activated from this road as others have done but I decided to use the bridleway to the North which leads off the Viking Way long distance footpath. The wife dropped me off at Acre House Farm and she went off to hunt for yet more geocaches and I set off down the track to find a suitable place to set up. I was a little hampered by the proximity of a power line which followed the bridleway but as luck would have it just as I had finished setting up at my chosen spot the landowner came down the farm track in his Land Rover.

I had a friendly chat with him and he was fully aware of what I was doing and had no issues having met other activators in the past. He also gave me permission to walk across his land up to the trig-point if I wanted to. As I've mentioned it isn't on a public right of way but said he is more than happy for people to go to the trig-point providing they ask at the farm before hand and take home all their rubbish, unfortunately he has some recent problems with inconsiderate litterers.

I decided to decamped and following his instructions to a gap in the fence and set off to the trig-point which was a little bit further away and a little steeper than I thought, but it didn't help I was carrying a half made up antenna, poles and a bag full of kit and my not inconsiderate bulk! Anyway I got there but due to us running already behind schedule and my change of location it was getting late in the day and was nearly 5pm.


I had taken my Yaesu FT-857D, two 7Ahr SLA batteries, fibreglass pole, antennas for 20m/40m HF, 2m SSB and 2m/70cm FM. Yes I'd travelled light! Having some lovely clear views all around I decided to try some 2m 'line of sight' contacts.

I put up the Sandpiper Delta Beam for SSB (horizontal) and my 'flower-pot' dual band for FM (vertical) on a fishing pole. The wind had started to pick up and I'd not got any proper bungee cords (doh!) so I lashed it up using guy ropes around the pillar.

The radio was perched on top of the pillar and I put some calls on 2m SSB with no luck and switched to FM with more success. I was using between 5-10W and got nothing exceptional distance wise but racked up 8 very nice clear QSOs to claim an activation. The wife texted me to say she had returned from her searching and was parked up patiently at the farm awaiting my return, not hurrying me by any means. It was now nearly 6pm and the wind was getting up and the temperature was starting to drop. It had been a long day for us and the dogs so I decided to packed up and went back down the hill to the bridleway admiring the view across to the Humber and the Humber crossing.


I really enjoyed myself but wished I'd allowed myself more time, this was in part because it was a late decision in the week to tack the 'summit' on the end of a day out walking and changing my mind to actually go to the summit given the chance but it was nice to do that for my first SOTA but I really need to get the hang of travelling light.

After my last post (which is also syndicated to AmateurRadio.com) I had some questions about Geocaching - Dave, WD8CIV left this useful comment which I shall repeat as summed it succinctly - thanks Dave.

"Geocaching is like a high tech Easter egg hunt. People hide caches – waterproof containers containing a logbook and maybe some little trinkets – and then post the GPS coordinates to a Web site like geocaching.com. Others will search the site for caches in an area of interest, then use their own GPS (and intuition and woodcraft skills) to try to find them. Anyone who finds a cache signs the logbook, may take one of the trinkets and/or leave a new one, then goes back to the Web site and reports that they found that cache. There’s quite a community of geocachers, and it’s been going on for over a decade."
Andrew Garratt, MØNRD, is a regular contributor to AmateurRadio.com and writes from East Midlands, England. Contact him at [email protected].