First QSOs with the UV-5R 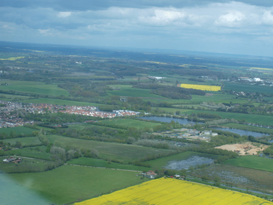 Although I’ve had the UV-5R around for several weeks and I’ve been using it to listen to various repeaters and stations, I hadn’t actually had a QSO with it!

This afternoon, a glorious hot afternoon, with temperatures around 23C I went out for a walk to our neighbouring village, Hinton Waldrist to deliver some papers and some Sky at Night Magazines to a friend. I popped the UV-5R in my pocket.

First QSO was a bit unusual actually – through the 2m repeater GB3WH. I’m faintly suspicious in retrospect that the gentleman concerned, although he was sporting an M6 call may have actually been a CBer trying out a rig, with a made up call! I couldn’t be certain of course, it might have just been a newcomer to the bands who’d spent time on CB before. As I’ve said before, I’ve no problem with that and most modify their operating style over time to reflect amateur, rather than CB, practice.

Second QSO was much easier, with Rob G4XUT on the 70cm repeater GB3TD. Rob was using a converted PMR rig which sounded good and was able to give me a good report on the UV-5R so that was very pleasing.

I also found that I could get into the GB3UK repeater up on the Cotswolds very reliably.

I’ve programmed the UV-5R now, with most of the local repeater frequencies as well as 145.800 in case of any ISS passes and some of the marine band frequencies used in the London area.

2 Responses to “First QSOs with the UV-5R”