I carried out my first modification to the KX3 – or rather to the KXPD3 paddle. It was the mod to solve the missing dah problem. I hadn’t experienced it, but it was one of those issues that would rear its head at the most inconvenient opportunity so I decided to do the mod. This involved disassembling the KXPD3, cutting one track and bridging two pins on the key’s circuit board. 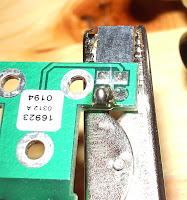 The KXPD3 came apart easily, in fact rather too easily as it disintegrated into its component parts before I had a chance to see how it went together. That’s the trouble with taking apart something that has a spring in it!

I then cut the track indicated and bridged from one pin to the adjoining track. Why is it so difficult to make a solder bridge when you actually want to.

I reassembled the KXPD3. Before I did I dismantled a couple of 409Shop complimentary ball point pens to see if they would provide an alternative spring for the paddle. They did, but they didn’t seem to be weaker than the original (the only way to alter the tension with this key is to change the spring) so I reassembled using the original.

After that I connected the KX3 up to a dummy load to try out the modified key and confirm that I hadn’t broken it. The key still worked, and my sending was still as bad as it was before, so all was as expected.

I hade a tune around on 40m and heard one of the special even stationsfor the Olympics, 2O12L. He was loud enough to be an easy contact with the QRP KX3 – but I was getting no transmit output! Eventually I switched to the K3 and worked 2O12L followed in quick succession by the Welsh Olympic special event station 2O12W.

After I had completed the cotacts I switched back to the KX3 to find out why I was getting no SSB output. I found that VOX was working, the rig was switching to transmit, but I was still getting no output.

Eventually aftter much tearing of hair and playing with settings I discovered the reason for the problem. I had turned the power down to 0.0W when I was testing the keyer…