This appeared on the KX3 YahooGroup reflector today:

Attached is a photo of KX3 #6. It’s an outdoor shot with the backlight off. This unit is in Field Test here, which is its own type of milestone for all those waiting patiently. I’ll be writing objective appraisals of this FT unit. That will be my intent, anyway (objectivity). This email is a first cut. Read on.

My personal opinion is that this is the coolest amateur transceiver ever designed, built, or dreamed of. Perfect size, perfect weight, VERY respectable performance. You can *really* take the KX3 with you, and you’ll really want to. Mine’s going everywhere with me, including the workplace! I know my engineering staff will demand to see how Wayne and crew fit it all in, and how well the KX3 works.

After one day using this unit, I’ve reached the conclusion that the KX3 is basically ready for initial production. As is usual for a ‘young’ rig from Elecraft, firmware is still a work in progress. This should be no surprise to anyone on this list. The hardware is at near-100% shape, IMHO. There are a few minor issues – mostly features not yet implemented. And I mean minor. If I weren’t an engineering manager in the consumer products industry I would not have noticed any of them. The electronics seems solid, and I’ve done a bit of lab testing for MDS and selectivity. Most of my testing has been on the air though. My lab testing shows MDS better than -136 dBm, but my signal generator can’t extend any lower. No problems with rejecting out of band signals (away from the roofing filter’s coverage).

On the air: I’ve had about fifteen CW QSOs, using between 1 and 12 Watts output power. The antenna is a homebrew multi-band vertical, ground mounted. Four of these Qs were on battery power. No differences were found between operating on external and internal power, except for the output power limitations due to batteries. One Q was with an extremely weak QRP station in New Mexico. The APF helped with this, to the point that I could not have pulled him out without the feature. With APF engaged, his signal was 539 with rapid fades to 319. He was running 0.5W and I was running 3 W. Great ragchew, with very few repeats.

Except for Navy-Marine Corps MARS, I’m mostly a CW op. Several SSB contacts went successfully after a false start: I had to finagle the MH3’s input connection a bit (a virgin socket seating issue). I set the MIC and CMP values by listening on a second receiver and built in MONitor, giving MIC=18 and CMP=10 as the best combination. Audio reports using the MH3 and this setting were excellent – “clear as a bell” and “good presence”. Output using the internal speaker is adequate, though not amazingly loud. Some of that is probably my 55 year old ears and too many rock concerts when I was younger. The frequency response seems relatively flat and lows are surprisingly well-represented. Distortion is low (< 2% THD the way I hear it).

The FOC and NA contests run this weekend were an interesting environment for first-time ops on the KX3. Lots of strong signals, many in excess of S9+25. A majority of the QSOs mentioned above were near strong signals and with the roofing filter in place I had pretty good luck ignoring the big guns while working weak signals. I have to admit this is completely subjective, however years of experience with the K3 also tells me that the KX3 has similar characteristics in this regard. The best example from on-air testing was the NM CW station I mentioned above. His signal was marginal, meaning the APF was essential for pulling him out of the band noise. At the same time, 3 to 4 KHz up was one of those big guns thumping away. I could even hear key clicks from the contester, but only a tiny amount of blocking from his signal on the KX3. That’s what I mean by “similar to the K3”. It’s not identical though. I found instances where a little bit of a strong station’s signal was near- or in-band, and as you would expect some pretty severe blocking occurred. I’d recommend everyone make sure they have the roofing filter on the “essentials” list for purchase. In many ways the roofer makes the KX3 what it was meant to be.

One thing that’s notable and exceptional: I haven’t seen any of the typical issues of a “zero IF” architecture. No image problems, no ripple in the passband (in either SSB or CW), no audio artifacts. The advantage to a zero IF architecture is that there’s no “donut hole” around the IF frequency; there are others too – one single conversion takes less space than multiple conversions, less power consumed, less heat generated.

As a Navy-Marine Corps MARS operator, I’m looking forward to using the KX3 in our ECOM exercises. Its size and power consumption are perfect for such types of portable operation. It’s the item that will take the least amount of space in your Go Kit.

Sorry so much of this is non-quantitative. I’ll try to get more out after another day or two.

Standard disclaimer: I am not employed by nor do I have a fiduciary interest in Elecraft. 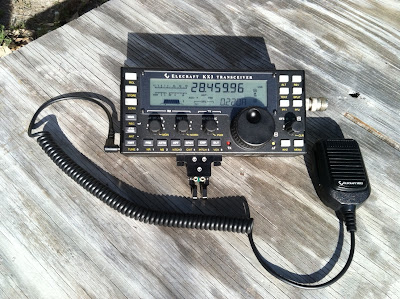