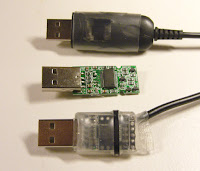 Both the Baofeng UV-5R handheld UHF/VHF radio and the Sainsonic AP510 APRS tracker come with interface cables with pirated chips. These are clones of Prolific USB/serial chips. Since Prolific has taken measures against this, only old drivers will work with them. That means that one has to stop automatic driver updates as explained on the Miklor site for the Baofeng UV-5R. The same is true for the AP510. This is a nuisance.

I got tired of this and got myself some USB/serial modules from Ebay based on the CP2102 chip instead. The cost was US $1.43 a piece so it should be affordable for anyone. I also got some clear heat shrinkable tube. 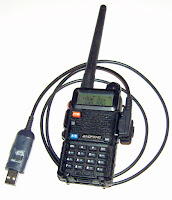 It wasn’t too hard to follow the instructions on the Miklor site. I ended up replacing the chip in the original Baofeng serial cable. I’m a hardware guy so I think it is a shame not to see the three LEDs for power, rx, and tx so I used my Dremel to make a 12×12 mm cut-out in the original case, and then I closed it by using transparent shrinkable tube. For a picture, see the top of the first image.

If it doesn’t work the first time, exchange the rx and tx connections and see if that works better. According to this site, the boards can be marked just opposite of what you might think.

The Sainsonic AP510 APRS unit has a cable that on first sight just looks like a standard USB cable, but it also contains such a chip. Here I made a completely new cable without any case.  It is important that 5 Volts also passes through as this is used for charging. The pinout can be found on the site of DJ7OO (use Google translate if needed). I enclosed the board in shrinkable tube which is transparent enough for the LEDs to shine through as seen in the bottom of the first image. The board with the fake chip is found in the middle.

So now I have interface cables for both units that don’t require me to stop updates of drivers or any other special precautions and it is much easier to program the devices from any PC.