Many friends who have been at this hobby a lot longer than I have worked some pretty famous people – King Hussein of Jordan, King Juan Carlos of Spain, Barry Goldwater.

I have never worked anyone famous per se, but I did get a chance to work the Arizona DX Association last night, which is celebrating Arizona’s Centennial this week.  Their call is K7UGA – the same used by Senator Barry Goldwater (SK).  So when I heard them on 40 Meters tonight, I jumped at the chance. 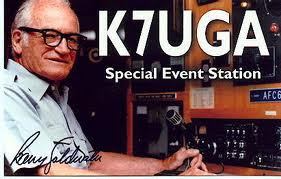 It took a while for me to break the pileup; but I was successful.  5 Watts and the HF9V yielded me a response.  I got the customary “599”; but they were truly a 599 here into New Jersey.  One of the loudest signals on the band.

I will definitely send for a QSL card, as this may be the closest I ever get to working a “famous” Ham.