21 December 2016 | by Steve VE7SL  |  Share |  Tweet |  Leave a Comment (2)
My recent round of 2m moonbounce activity reminded me of how much this mode has changed over the years. Back in the early 80's I decided that building a 2m eme system would be a good project for winter evenings and would keep me out of trouble for a few years. Back then, it was all CW, with a smattering of SSB reserved only for the big-boys.

Unlike today's widespread JT65B usage on eme, where signals can be many db into the noise and inaudible by ear, eme contacts could only be completed by actually copying signals that you could hear with your ears. This usually required big antennas and lots of power.

After a year and a half of evening work in my basement shop, my system was pretty much ready to go. I built a kilowatt amplifier, from the ARRL's VHF Handbook, along with its plate and screen power supplies.

The amplifier used a pair of 4CX250Rs ... a very popular tube to use then and readily available. The amplifier, when run in class-C, would put out nearly a kilowatt. All of the parts were reclaimed from surplus, purchased inexpensively at our local, long gone, 'Satellite Surplus' store on Vancouver's Main Street ... this was a goldmine of radio-only parts. Pete, the proprietor, was a real character. He had a good eye for a bargain and would buy government surplus lots of equipment and strip them for parts. He must have been well-connected as the place was full of gems ... but one dare not try and argue about prices! I saw more than one guy kicked-out for trying to work Pete down a few bucks.

My antennas (see above), as well as the large H-frame support, were also built in the basement and used all scrap aluminum from one of the numerous scrap yards that were in Vancouver at the time. The system consisted of sixteen separate 6 element NBS-styled yagis, all phased. Many of the two-dozen plus N connectors were bought at Boeing Surplus near Seattle, another interesting source of parts, also now long gone. Keeping water out of the phasing lines and connectors was a real challenge here in the rain forest and if one connector was not done exactly right, would create a lot of headaches.

The antenna took up a large portion of my small, 33'-wide suburban backyard. Pointing was all done by hand, using homemade scales to indicate elevation and azimuth angles, so that it could be pointed accurately even on cloud covered days and nights. A hand-cranked boat winch took care of elevation. I had a switch-box full of surplus VHF relays out at the antenna that protected my JFET preamp and also allowed me to compare sky and sun noise against a 50 ohm load.

Over the course of a few years, the system was employed to work many Europeans as well as North American VEs' and Ws'. The one contact that stands out memorable for me, was with UA3TCF, east of Moscow. This was because I had to aim the array directly into my two-story house, located about 20' away! The moon was very low as well, so that not much elevation was required. 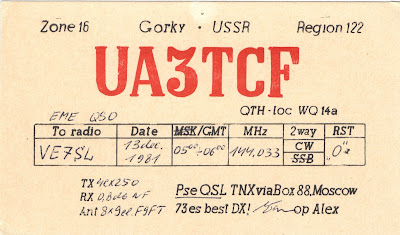 I eventually found that trying to hold down a full-time high school teaching job and running sked requests at 0300 were not very compatible! It also became a lot of work just to maintain the system properly. I had met and completed my original goals and it became time to move on.

Eventually the array was broken down into smaller sections and sold to local 2m guys, along with the amplifier ... but it was a huge learning experience for me and the fact that I survived building and playing with a 2,000 volt power supply, still scares the heck out of me!