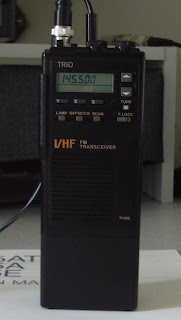 Whilst buying on eBay can sometimes result in a piece of junk, it can also produce the occasional lucky find. The radio pictured on the right is my latest auction success which arrived this morning. It is a Trio / Kenwood TH-205E of 1986 vintage which was being sold as for spares or repair. It cost me all of ten quid ($15 for my US readers), four of which were for postage.

When it arrived it was a bit oily, for some reason, but a wipe over with some tissues took care of that. From the front it looks almost like new – no scratches or signs of wear on the markings or buttons. The rig has obviously had an active life though as on the back the paint has worn away and the serial number plate and the warning notice on the battery pack have been polished almost clean of lettering.

The seller stated that they could not get the radio to charge up, which is no surprise, as for 24 year old NiCads to still retain a charge would be nothing short of a miracle. I applied 9V of external power, switched on, and was pleased to see “144.000” appear on the display and hear the hiss of an unsquelched receiver from the speaker. My initial delight at having acquired a worker was short-lived, however, as the frequency display failed to respond to the up/down buttons and the squelch did not seem to work either.

After a while spent pressing buttons in the faint hope of getting the frequency to change, it suddenly did increment a few steps and the squelch also operated. Then the radio gradually became more responsive to the buttons and I was eventually able to persuade it up into the 145.500 region. I connected my QRP power meter and was delighted to observe that the TH-205E was putting out a good 5W in the high power position and 1W in low power. I could also receive the signal on the TH-F7E standing nearby, which was somewhat dwarfed by its older sibling. I’d forgotten hand-helds were still this chunky in 1986!

I connected an antenna and found that I could receive all the local repeaters, so sensitivity is acceptable. The TH-205E will only do 5kHz steps so it isn’t suitable for 12.5KHz channeling, but the receiver is broad enough to receive the GB3LA repeater on 145.7125 when tuned to 145.710 with perfect audio. There is no CTCSS, though there is a tone-burst switch (which I haven’t tested.)

Apart from the up/down frequency selectors the only other front panel button that appears to work is the Lamp button which backlights the LCD display. I can’t activate the repeater offset or program or recall any of the three frequency memories. Possibly these buttons will eventually spring to life after repeated pressing. Otherwise it may require a look inside to see if it is possible to clean the switch contacts. But to be honest I’m not all that bothered, as I’m unlikely to be using the TH-205E on any repeaters.

The most I hoped for when bidding for this was a radio that could easily be got working and could then be put to use as a dedicated rig for APRS on 144.800 or something similar. The least I expected was something I could cannibalize for £10 worth of useful parts. So already I have got more than I hoped for!