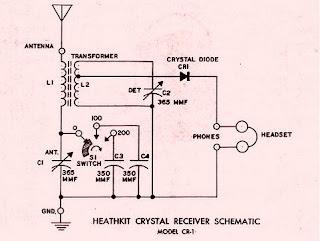 If you’re a regular blog reader, you will likely recall my description of  “The Enigmatic Heathkit CR-1 Crystal Radio” a few weeks ago.


Back then I mentioned that I was ‘eager to get my mitts on one’ and that I had arranged to borrow a CR-1 from another VE7 who was fortunate enough to own one.

A few weeks after posting the blog, I received an e-mail from Larry, WB5OFD, in Texas.

"Reading thru your blogs the other night ... discovered your article on Crystal Radio reception reports. I am in the process of disposing of a lot of radio gear I have collected over the past sixty years and in that pile is a Heathkit CR-1. Yours for free if you would like to have it."

Needless to say I was overjoyed, both at the opportunity to actually own a CR-1 myself and at Larry's exceptional generosity!

Larry went on to explain that he had been in the Air Force and his little CR-1 had been all around the world with him, from Alaska to Turkey ... but from its fine appearance, you would never know it.

He was happy to pass it on knowing that it was going to a good home. I am most appreciative of this kind gesture from a fellow radio amateur, knowing that these things are not too easy to find ... and are somewhat pricey!

As can be seen in the schematic diagram above, the CR-1 is a simple double-tuned crystal receiver, utilizing a series-tuned tank circuit for antenna-tuning, coupled into the detector tank circuit. The detector diode, a 50’s-era 1N34, is tapped down on the tank for headphone impedance-matching and to reduce circuit loading. Reducing the load on the tank circuit improves selectivity but diminishes sensitivity. Crystal radio design is always a trade-off between these two critical characteristics.

Although I had heard good things about the CR-1, I must admit that I was somewhat skeptical ... just how good could an unmodified CR-1’s simple double-tuned design really be? I was about to find out.

My listening location, on the eastern shoreline of Mayne Island, puts me directly across several miles of saltwater from sixteen exceptionally loud 'blowtorch' signals whose antennas are located near the water on the other side of Georgia Strait. Six of these stations run 50kW ... 24/7. All of these signals are wide and strong, being well-over S9. It is a difficult location for crystal radio DXing as separating weak DX signals from the blowtorches can be challenging.

My previous experience with crystal radio DX is well-documented on my website here. Back then, I quickly adopted the standard protocols to help hear DX. This included the use if a separate ‘spotter’ radio to first find signals that might possibly be strong enough to be heard on the crystal detector. I also used an RF signal generator that let me temporarily put a weak tone-modulated carrier on the frequency of a station that I was trying to hear. Using the tone, the antenna tuning as well as the detector circuit can be optimized for maximum signal. I also used a 100 microamp meter in series with the headphones to make peaking these circuits accurately. The same protocol was used for my CR-1 DXing as well.

Since there are so many very strong signals here, I have added two inline L-C traps on the antenna lead.

My first trap was made from a ferrite bar loopstick inductor salvaged from an old transistor radio. 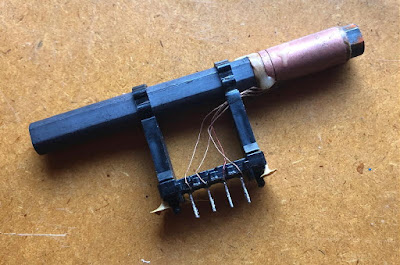 The second trap is made with a ferrite toroid and Litz wire and produces deeper nulls than the ferrite bar. The bar will soon be replaced by a second toroid trap. 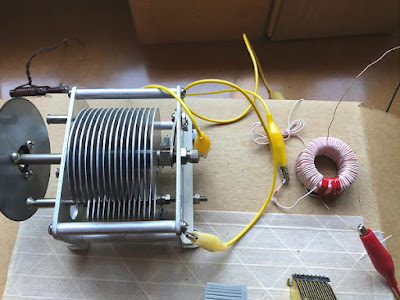 The traps allow me to significantly null any strong signals that could be covering up a nearby weaker signal. For nulling, I set the signal generator on the frequency of the pest signal and then tune the trap for a null while watching the meter. Once everything has been tuned, I’ll often just sit and wait for the desired signal to fade up to a detectable level on the crystal radio and then confirm its audio match to what can be heard on the spotter radio.  Very often, a signal initially too weak to be detected, will quickly pop up in signal strength to an easy-copy level for several minutes, before dropping below the threshold of diode detection level once again.

I am presently using a pair of RCA WWII sound-powered ('Big Cans') phones, impedance matched to the CR-1’s output with a multi-tap audio transformer. I have also used a nice set of extremely sensitive Western Electric 509Ws, manufactured in the late 20s. These are also impedance-matched to the CR-1's output. On weak signal tone tests, I can see only a very tiny improvement with the RCAs versus the old 509Ws as both are very sensitive. 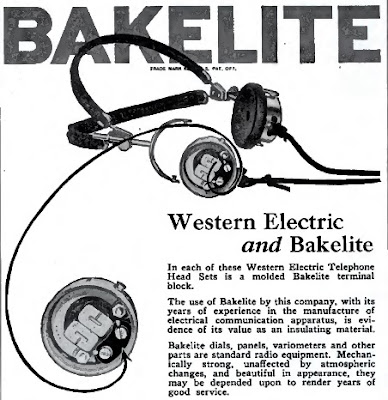 There is a large variation in propagation quality on the broadcast band, especially this far north on the southern edge of the auroral zone. The difference from one night to the next can often be quite dramatic. On most nights the band favors the north-south path while on geomagnetically quieter nights it’s the east-west path that dominates. The band needs to be in good shape for any worthwhile hope of DX on a crystal radio.

On one of the recent better nights, of which there have been very few of lately, one of the stations in Alberta was so strong that it needed trapping! This was something I saw quite often with my previous DX set but I didn't expect to see it with the CR-1.

For crystal radio DX, propagation is the best helper. Small incremental improvements (in terms of db losses) can be made in any part of crystal radio's systems but on nights of good propagation, tens of db improvement will magically appear, thanks to Mother Nature!

When in Turkey, Larry had the opportunity to connect the CR-1 to the large FLR-9 circular antenna array used during the cold war for HF direction-finding of targeted signals. Covering 1.5MHz to 30MHz, the FLR-9 consisted of ninety-six 120' towers, suspending 1056 vertical elements ... all over a 1500' diameter ground screen! His notes show that he logged the BBC, Italy and West Germany on the CR-1 while using the array!

Although the antenna system connected to my CR-1 is not nearly as impressive as an FLR-9 array, it is very capable on the broadcast band. I’m using my 630m inverted-L, bypassing the tuning and 50-ohm impedance matching system, essentially feeding it as a top-loaded vertical wire. The (somewhat slanted) vertical wire is approximately 70’ which is then attached to a 3-wire 100’ long tophat. The antenna is very close to the ocean and parallel with the beach. The CR-1 ground system consists of about 60 buried radials, varying in length from 30-60’. The basic antenna is self-resonant at around 1200kHz.

Over the past few weeks, I have been spending a few nights patrolling the band between 9:30 and 10:30PM, to see what might be heard with the CR-1. So far, I've logged 50 different stations ... far more than I had expected to hear.

The log below shows all of the stations heard. The stations in red are all local line-of-sight transmitters and are extremely strong ... all are well over S9 on my Sony spotter radio. The stations shown in blue are all ‘DX’, with the furthest so far being KOA in Denver, at 1100 miles. 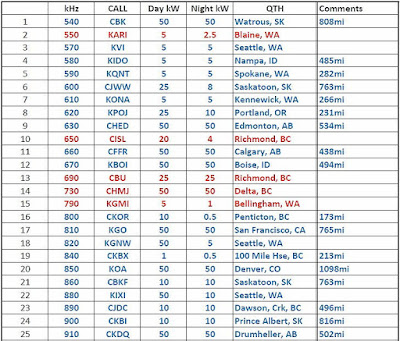 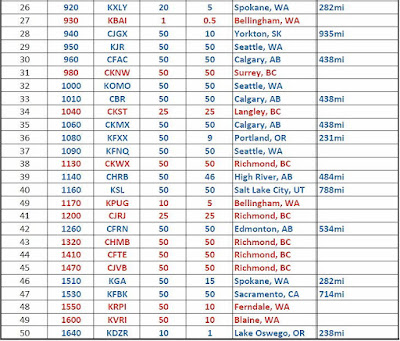 The log illustrates just how much the blowtorch signals prevent weak-signal detection, even with traps! The stations logged on 1510 and 1530 were only possible when the 1550 blowtorch lost their audio for about five minutes one evening! Selectivity becomes increasingly more difficult towards the top end of the band and, unfortunately, there is a larger concentration of strong locals (who seem to delight in over modulation and splatter), making reception up there extremely challenging.

There are still some lower-band signals that I have yet to log and they have been gradually growing stronger as the nights get longer. As well, the region above 1600kHz may still provide a few opportunities over the next few weeks, if the loud local on 1600 can be sufficiently trapped ... the next few weeks will tell if there’s anything left in the CR-1’s tank!

7 Responses to “DXing With The Heathkit CR-1 Crystal Radio”