8 December 2019 | by Steve VE7SL  |  Share |  Tweet |  Leave a Comment (3)
The following blog was originally posted in 2015 but might still be of interest to anyone with a shortwave radio! Since the migration of HF aero traffic to satellite has been slow, there is still a lot of oceanic traffic to be monitored on the bands, 24/7.

Unlike the growing scarcity of good HF maritime DX targets, there is still a large amount of HF aero activity to enjoy! Even with the move to satellite comms, there is still, at any given time of the day or night, hundreds of aircraft using HF radio to communicate with controllers, companies and home bases. Both commercial aviation and the military, as well as many privately owned aircraft, use the HF communication networks to keep them flying safely. From trans-oceanic 777s' and military transports to single engine float planes in the Canadian Arctic and Alaska, the sky is alive with DXing opportunities!

A huge percentage of commercial aircraft are delegated to moving freight and many of them can be heard on HF radio. Many of the planes in use are retired passenger planes that have been reconfigured for moving cargo. Back when I did this type of listening, older DC-8s seemed to be particularly popular, especially on the nightly South / Central America to Florida routes. I suspect that nowadays, these have been replaced with older DC-10's and 747's. 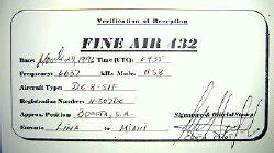 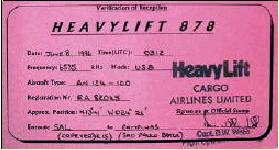 'AFM 01' was a DC8-55F logged while working Brazzaville Radio (Congo) on 8903kHz. It was at FL350, enroute Harare, Zimbabwe to Kano, Nigeria at the "MPK" waypoint, 250 miles east of Kinshasha, Zaire. Brazzavile was advising of 'crossing traffic, same level...please say intentions'... Yikes!

'PACIFIC AIR EXPRESS 3517' was heard on 8867kHz working Brisbane Radio while over the Coral Sea. The Lockheed L-188C four-engine turbo prop was enroute Honiara to Brisbane with a load of fresh tuna destined for the Japanese market. N360Q, shown on the ground at Honiara, was leased from the states and operated by Charrak Air. 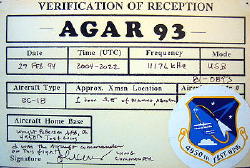 The U.S. military is still active on HF radio and some interesting catches can be had. During the testing phase of the 'cruise' missile, the missile navigation systems were tested over the Northern Territories and Alberta. Once dropped from their B-52 launch platforms, the missiles were tracked across Alberta by Advanced Range Instrumentation Aircraft (ARIA). 'AGAR 93' was heard on one such mission on 11176kHz. 'AGAR 93' was # 81-0893, an EC-18 (modified Boeing 707) out of Wright Patterson' 4950th Test Wing. According to the aircraft commander who signed my verification, the aircraft was approximately 1 hour S.E. of Namao, Alberta. One can easily see why # 81-0893, shown here, was affectionately known as "The Beast". 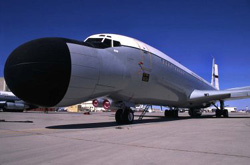 'DOOM 81' was a gigantic B-52H from the 96th Bomb Squadron, stationed at Barksdale AFB, LA. The appropriately named big bomber was heard on 11176kHz while working Ascension Radio and was just about to rendezvous with their mid-air refueler when the mission was aborted. This was the first and only B-52 that I was ever able to confirm. 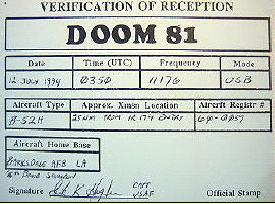 'ROMA 99' was logged on 17975kHz while working Thule Radio. They were taxiing for takeoff at Dulles International in Washington D.C. and reporting a minor fuel-pump problem. 'ROMA 99' was a KC-135R Stratotanker, # 62-003512, from the 509th Air Refueling Squadron at Griffis AFB, NY. 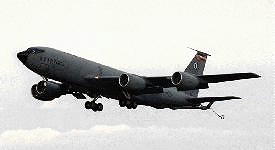 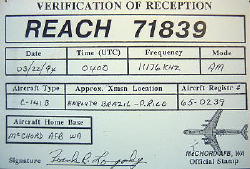 There's still plenty to be heard on HF, outside of the amateur bands and a quick internet search on 'Utility DX' will turn up several interesting and informative sites ... each one having an abundance of related links to follow. Here are some that will be helpful:

If you can catch an aircraft's four-letter SELCAL code, often given during waypoint checks, you can search here for more info on the actual aircraft itself:

http://mt-milcom.blogspot.ca/
Steve McDonald, VE7SL, is a regular contributor to AmateurRadio.com and writes from British Columbia, Canada. Contact him at [email protected].

3 Responses to “DXing The Utilities (Part 2)”