Done and on the air!

It was hot here again today with highs in the mid 90’s – I believe the high for the day was 95F (35C); so I stayed inside where it was cool.

That gave me the chance to play radio and get the K3 completed.  Between spurts of kit building, I managed to work my good friend Bob W3BBO on 40 Meters this afternoon.  We had a nice 30 minute rag chew and he was using the 44′ EDZ that he recently put up at his new house.  It worked well.  He started out at 559, but when the QSB kicked out, he was a solid 599 from Erie, PA to South Plainfield, NJ.  We had some QRM come in towards the end of our QSO; but the KX3’s silky smooth filtering knocked the interference right out. 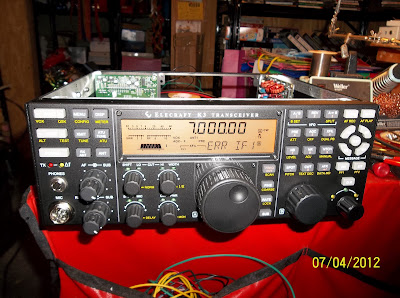 I managed to get the front panel mounted and got to the stage of doing the smoke test.  No smoke!

Another hour or so and I was able to finish everything, do the calibrations and get the radio set in its place on the shack table. 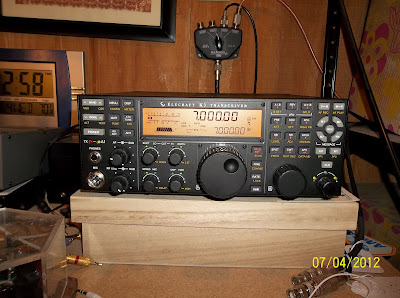 The first QSO was Neal N4HAF on 40 Meters.  We had a nice little rag chew going and it was an enjoyable QSO. I worked John K4BAI on 20 Meters and started gabbing with him – only to realize that he was partaking of the MIQRP 4th of July Sprint. Doh!  I quickly apologized to John and let him get on with this business of making more QSOs.  I also worked AC8W in the same contest on 40 Meters and then switched back to 20 Meters for a short chat with Mike N0ZH, who will be Skeeter #55 in the Hunt in August, by the way.  It was good to hear Mike, it had been a while since we has last QSOed.

Anyway, after becoming acquainted with the KX3, it was nice to see the K3 is just about the same with a few minor differences.  It will still take a while before I feel “at home” behind it like I do with the K2; but that will come.  Some of the things that are a surprise are 1/4″ sockets for phones and paddles.  I am so used to the smaller miniature jacks that are used on the K1, K2 and KX3.  But it was nice to be able to hook both antennas up without having to use PL259 to BNC adapters.