Do LCDs wear out?

Do LCD displays wear out or fade with age? 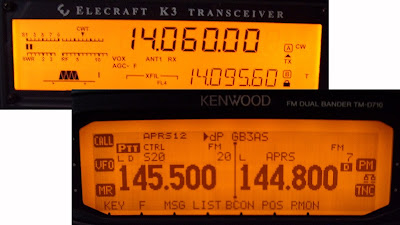 The picture above shows the displays of my Elecraft K3 transceiver and my Kenwood TM-D710 VHF rig. The Elecraft display is sharp with good contrast and characters look almost black against the orange background. The Kenwood display is much less contrasty. The backlight is not as bright as the K3’s but the characters look more murky brown than black no matter how I set the brightness and contrast. It’s quite noticeable when the two radios are side by side.

I don’t think the Kenwood’s display was ever as bright as the K3’s but I don’t recall it being as murky as it is now. Whenever I look at it I keep wanting to turn the contrast up. I’ve taken to turning the backlight off altogether so it doesn’t bug me but there is no option to have it turn on automatically when a button is pressed. (AUTO BRIGHTNESS: ON appears to do nothing.)

My D710 has been running 24/7 for more than a year (with a brief hiatus when I went into hospital until I felt like running the APRS gateway again.) Could the display have faded (for want of a better way to describe it) over time? Or is my recollection that the text used to look more black than brown faulty?

4 Responses to “Do LCDs wear out?”