Last weekend, I had the privilege of attending the Pacificon amateur radio convention in Santa Clara, something I have been trying to do for several years now. It is a great event, with good technical programs and a super venue.

The most interesting presentation I saw was the one on digital voice (DV) technology by Bruce Perens K6BP. The presentation was mostly about the digital voice known as FreeDV,  an open source approach to DV that uses the Codec 2 voice codec for digitally processing/compressing speech. 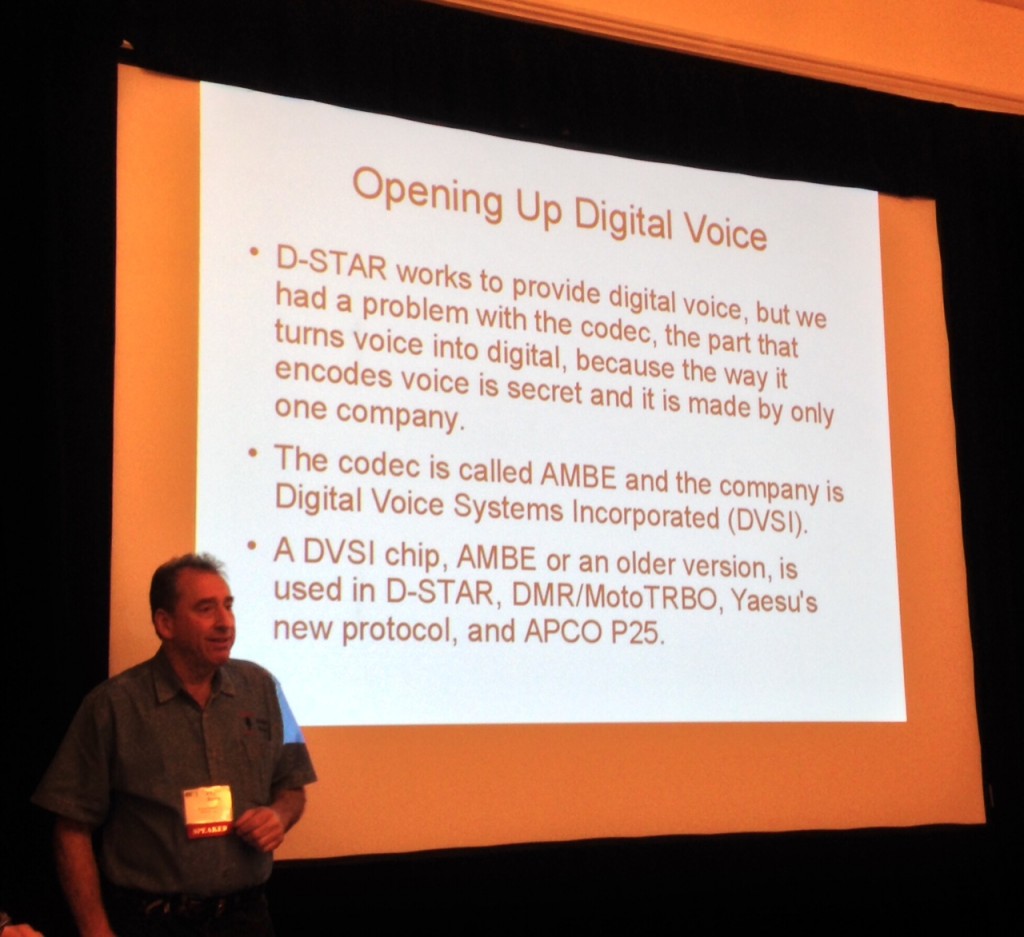 I won’t cover all of the technical details here but you can follow the links above to go deeper on the topic. The initial FreeDV efforts are focused on the HF bands, using the sound card plus computer approach to implementing DV. This is a good approach since it is a relatively easy way to adopt this technology. (Compare this to VHF/UHF where you need to solve the repeater infrastructure problem to make progress.) FreeDV operates with a bandwidth of  1.25 kHz, narrower that the standard 3 kHz or so SSB signal. FreeDV also has the benefit of degrading gracefully as the  signal-to-noise ratio is decreased, with less of a digital dropoff that we see with D-STAR and other DV technologies.

Like many hams, Bruce pointed out the concerns and limitations of the proprietary AMBE chip used in D-STAR, DMR and now the new Yaesu DV system. I totally get this point and support the idea of a an open source codec. On the other hand, this work is coming more than a decade later than the creation of D-STAR. I like to refer to this phenomenon as ”our ideas are better than their products.”

Bruce introduced Chris Testa KB2BMH to talk about the “HT of the Future”. This is a handheld transceiver implemented using Software Defined Radio (SDR) and inspirations from the world of smartphones. As Bruce said, “Why isn’t your HT as smart as your smart phone?” This is similar to the Android HT idea that I blogged about a while back. See Chris’s blog and this HamRadioNow video for more information.

Another presentation that I attended was about D-STAR with several speakers, including Robin AA4RC. The innovation continues to happen in the D-STAR world with a strong theme of using Raspberry Pi computers to create D-STAR hotspots and repeaters. Robin described the “DV Pi” being developed…a DVAP-like daughter board that plugs into a Raspberry Pi. Jim Moen K6JM talked about the many ways you can implement a D-STAR Hotspot. For more info on that see his D-STAR Hotspot page.

There’s much innovation happening in the area of Digital Voice. It got me thinking about it again so I dug out my ICOM D-STAR HT and put my DVAP back on the air.

6 Responses to “Digital Voice at Pacificon”