Did you ever have “one of those days” 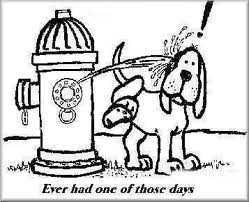 It's now Sunday and it's not been "one of  those days" BUT one of those weekends!!! Now that it's Sunday the frustration factor for me is just about blowing it's way through the roof  here. Maybe if I vent my weekend on the blog it will help level the playing field for me....oh and thanks for listening. Well Friday started off like any other Friday. I woke up to celibate the TGIF feeling, the weekend was here. My work day went well but it was after work that things when a little funky. After going to the gym I got back in my car to head home only to find I had left my Iphone and company cell in the change room. So back I went and both phones were gone!! I looked around in the change room and nothing, I checked with the front desk and no one had turned anything in. It was back out to the car thinking maybe they were in my gym bag or in the car somewhere. I ended up going back to the front desk at the gym to call my cell to see if rang in the change room. I called the cell and low and behold it started to ring at the front desk!!!! It was turned in and the young lady at the desk within all of 5 minutes forgot it was turned in
. Getting home I found the internet, home phone and cable not working. I called the provider, was on hold for over 25 minutes being told how important I was to them and to please hold. Seems there was a problem in the area it was being worked on. At this point thought I would work on my Elecraft KX3 movie with some final editing with Apples Imovie. Turns out you need the internet with Imovie to view the tutorials which I need so that was stopped as fast as it started. Since I was on the subject of the KX3 felt is was time to finish off the calibration of the rig. Well how do you think that worked out!!! Not so good the rig was calibrating transmit bias and was in some type of a loop were it would not stop. Oh well have to save that one for Elecraft Support on Monday.
Time to start dinner, went to open the cupboard under the sink......there was an smell coming from there like something had died. Turned out to be a leaking drain plug in the sink drain trap. The drain trap turned into an adventure.....purchased gaskets that were to small. Then I found the replacement drain plug complete with gasket......to good to be true drain plug turned out to be to big. Drain trap has to be replaced save that for next weekend, for now  put some silicone on the plug with a bowl under the trap.
Hey on Saturday the phones and cable were up and running but no internet. It was back on the phone to tech support and after unplugging and plugging things in and up and down stairs to the basement to the modem. The support came to the conclusion the modem was toast and so was I almost after all that running around the house.
Picked up a new modem at the cable store and hooked it up.....funny thing nothing in the house wants to connect up to the modem!!! Great back to tech support on the phone that for some reason now is NOT WORKING!!! Called them on the cell and they know about the phone troubles but the internet is good to go I was told.  Told her my troubles about getting on the net and the response was "I have no idea what's wrong" I was told I was not stating a problem to her just a statement....can you believe that!! To make a long story short I did it myself it turned out the modem and my Apple airport router did not like each other. With a few menu adjustments to both units they are fully in love with each other.
As I began saying today is Sunday and to not turn this post into a book not all adventures were mentioned. The lights in my radio room flickering, loosing my car keys while at the mall, dropping carton of milk at the grocery store (yes it went everywhere), leaving my debt card at the machine, taking a picture with my Nikon camera to have it display a message "all files are corrupt" then totally stopped working..... the list goes on. So it's now Sunday, Julie thought a nice trip to Starbucks with my laptop and her Kindle would be relaxing. That sounded great until the laptop decided to not start....nothing. When I got home I got the Linux CD out to see what I could do. I started the Laptop and it started just fine!!! I started and restarted that thing at Starbucks like 10 times and nothing it now works like a charm.
So how has your weekend been going???? To think it's not even over yet the adventure here at VE3WDM lives on.
Mike Weir, VE9KK, is a regular contributor to AmateurRadio.com and writes from New Brunswick, Canada. Contact him at [email protected].

6 Responses to “Did you ever have “one of those days””