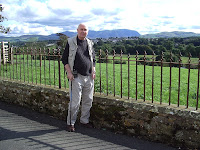 I have been itching to try venturing further afield and thought we might go down to the river Derwent at Papcastle. I carried the Kenwood TH-D72 on my belt to track the walk using APRS and see how far we got. When we reached the path down to the river we saw a paper sign saying “Derventio.” Olga thought – wisely with hindsight – that it would not be a good idea to walk down to the river as we would then have to climb back up again. We walked a bit further along the road and looked down towards the river where we could see substantial excavations were taking place. This looks like being a major archeological site. One day when I’m just a bit fitter we will go down and take a closer look.

We continued our walk with a loop through the village of Papcastle, then returned home the way we had come. On the way I heard and worked Richard G1JTD portable on the summit of Great Calva, and Liz M6EPW on my local SOTA summit of Watch Hill. That will undoubtedly be the first summit I will attempt but at the moment it is still too far – about 3 miles from our front door.

I was pretty tired and very sweaty by the time we got back to Cockermouth but I resisted Olga’s suggestion that we finish the excursion by taxi. Although what we had done was an easy walk by normal standards this was my most ambitious outing since finishing my treatment. 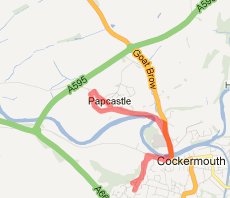 When we got home I could see that our track had been perfectly recorded by APRS. I was happy with that – and with the two contacts I made. I had only been using one of those stubby antennas about 5 cm long which are a couple of dB down on a rubber duck.

I saved the track as a GPX file and then produced a report using one of the online GPX report generators. According to the report we had walked exactly 4 kilometres. 1.5km of this had been climbing for a total ascent of 87m. To me it felt as if I had just climbed Scafell Pike!