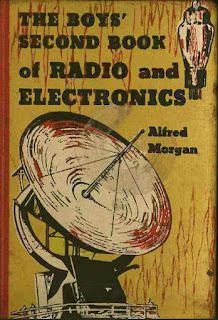 A quick read of the latest postings on the excellent "The RadioBoard Forums" revealed a recent donation, by RadioBoard regular Graeme Zimmer, of his extensive collection of scanned vintage radio books to The American Radio History website. For those not familiar with this site, it is a superb and extensive archive of radio-related magazines and publications developed and maintained by the very dedicated David Gleason. There are probably very few radio or electronic magazines of the past that you could name that won't be found on David's website.

Graeme's donation was extensive enough to garner its own page listing and many of the book titles will ring-nostalgic to a lot of us baby-boomers that were grabbed by the magic of radio while still in our formative years.

I was delighted to see one particular author's name in the list of publications, Alfred P. Morgan ... a name that many of you might recall with fond memories. I remember checking out many of his 'Radio For Boys' series of books from the top-floor school library when still in elementary school. I longed to construct some of the simple radios but at the time I was really too young to gather the needed resources and components to put something together. I had yet to develop any of the needed skills, other than the yearning desire to learn as much as I could about these complex-looking one-tube receivers ... but it was already too late I think, and like thousands of other young 'radio boys', Alfred Morgan had planted the seed that continues to flourish some sixty years later. Thanks to Zimmer's donation of over 100 different titles from various authors, many of those hypnotic publications can now be found on David Gleason's amazing time machine!