Kudos to Lynn KJ4ERJ, developer of the brilliant APRS client APRSISCE. Yesterday he read my comment that the program doesn’t support transmit through the soundcard based AGWPE software yet, and today it does! So now my APRS beacons are braaping out over the Cumbrian airwaves. 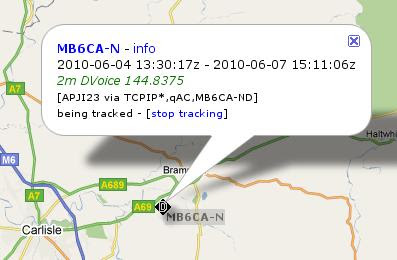 I have noticed a bit more APRS activity round here in the last few weeks. Today I noticed another new station mobiling around the north-east of the county – G7NZR. The info for this station showed that he was actually using DPRS, the digital version of APRS, and was being gatewayed through MB6CA. This is a D-Star simplex node set up by G7NZR. Its coverage map shows that MB6CA can’t be heard in Cockermouth or Workington, so for the time being at least West Cumbria is still a D-Star free zone.

When I looked at the MB6CA coverage map I was reminded of a map I saw some years ago showing the spread of grey squirrels across the county. Overseas readers may not know that the grey squirrel is an illegal immigrant – from the US, no less – and it has been gradually wiping out our indigenous red squirrels, so that there are now only a few pockets of them left.

Will D-Star be the grey squirrel to analogue FM’s red, gradually increasing its territory as more and more people are persuaded to make the switch, until Icom ends up with a virtual monopoly over the VHF and UHF bands?