With the solar flux index remaining relatively high over the past week, the F2 MUF has been spending most of the day in the mid 40MHz region. For 6m operators, it's always a good sign to see the MUF climb this high as it only takes a nudge to keep it climbing, hopefully to reach that magical 50MHz level.

The region between 10m and 6m is chalk-full of commercial two-way FM activity, particularly from 39MHz on up. With the skip zone running east-west, oftentimes the distinctive Boston accent or the unmistakable Bronx chatter can be heard...police, taxis, fire departments...sometimes even with sirens blazing away in the background. Other times, things will be further south, with accents favoring easily-recognized southern drawls.

Early this morning at 0641Z, a small M1.8 flare added some extra fuel to the F2 fire, resulting in an unusually early-morning rise in the MUF.

Now normally, at this time of the morning, the F2 MUF would continue to slowly climb....usually peaking-out somewhere between 1030-1230 local time, so things were looking hopeful. During our exchange, N3LL peaked at 599 as the MUF continued to surge between 46 and 50MHz, struggling to maintain its ever weakening-grip on the magicband.

From here, things went south fast and for some reason, the normally slow climb halted as the MUF quickly retreated to the low 40MHz regions...it was all over.

The end of the opening can be clearly seen in the geomagnetic activity recorded at the Kiruna Magnetometer (Sweden). The circled area indicates the period of high MUF: 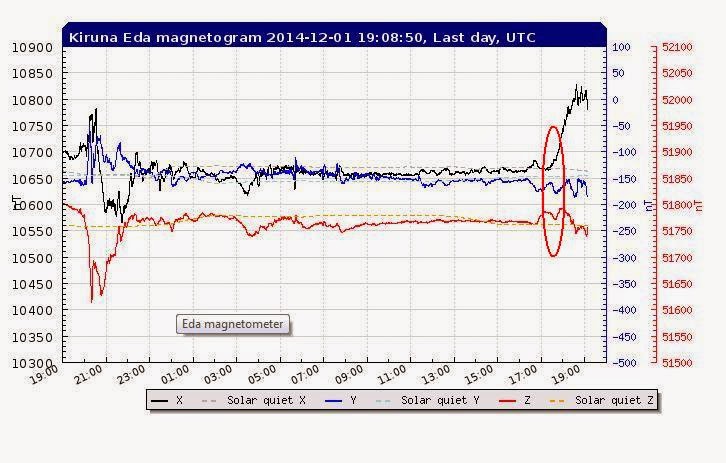 ...but what started the sudden spike in the MUF today...was it the earlier flare or the suddenly south-going 'Bz' component of the Interplanetary Magnetic Field as seen about an hour earlier?

Such are the things that 6m junkies find fascinating, as this portion of the spectrum is always full of surprises and curiosities. Even as it slowly decays, poorly-performing Cycle 24 can't resist the opportunity to keep us guessing once again.

I wonder what surprises tomorrow will bring?

One Response to “Cycle 24….Still Teasing”