Cross Country Wireless has just announced an updated version 2 of its low cost SDR Receiver. The new version has an RF preamplifier using a power MOSFET after the RF bandpass filter which is claimed to improve sensitivity – which was a criticism of the earlier version – and reduce local oscillator output at the antenna port. 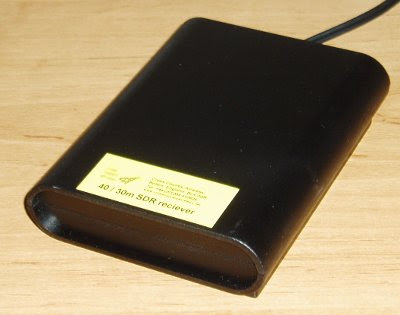 The designer Chris, G4HYG, claims that the receiver will now display a CW carrier at a level of -135 dBm on the waterfall of SDR-Radio using a 48 kHz sound card. The level of the local oscillator at the antenna port is now specified as -65 dBm, though a more typical measurement is -70 dBm. This should make it an ideal choice as a panadapter for radios such as the Elecraft K3. In fact, Chris recently stated that most orders for the receiver have been for use as panadapters, in conjunction with a sound card and suitable software such as PowerSDR-IF.

The cost of the standard SDR is £49.95. For panadapter use you will need a custom crystal for your radio’s IF which increases the price to £59.95. The SDR has two (switched) local oscillators so the other one could be specified to cover 40m or 30m for use as a conventional receiver. It’s also available as a built and tested board for assembly into your own case (at a significant saving.) If you built a USB sound device into the same box then it would be rather neat.