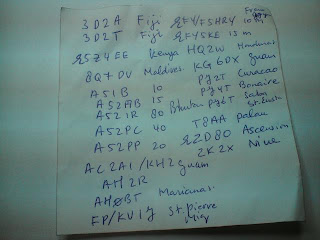 Incredible! Worked 20 !!! new band DXCC on 10m in the CQWW contest last weekend. That’s a lot. Propagation was very good especially on the 10m band. I actually made a wishlist before the contest with the help of the announced DX operations list of NG3K. Did not work everything fom the list as for example the PJ and A52 stations were constantly in a pile-up and I didn’t want to waste time with so many nice DXCC to work. But at last I did QSO with a few of the list. I even made a incredible QSO over the northpole to Alaska on 10m another first on that band. And no, I don’t work with a large beam but with a simple vertical made partially from Aluminium foil! I don’t have a lineair amplifier as well and did make all QSOs with 100W. I was not on the radio  the whole weekend, so I missed opening to Oceania. I was simply not able to be on the radio on the right time as family duty calls. But after all I cannot complain I made 450 QSO’s, 200 of them were made on the 10m band. And I was almost jumping in the air….I made my first QSO with XE zone 6 after years of trying on various bands.

Some highlights on 10m, of course I made some QSOs on other bands too:

I didn’t mention the countless northern American stations I worked on 10m. Imagine what would have happen if I used a beam, I think I would have doubled this list !!!