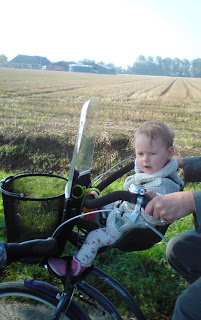 First of all you all probabely think I lost my mind and did paste the wrong photo. But it is just to show you that I did not contest the whole weekend as that would be absurd. We had the finest weather since weeks or actually months. So we took Anneli for some nice cycling in the morning and a walk in the Eemshaven in the afternoon. Well, besides the nice weather we all enjoyed I did some RTTY in the CQWW-RTTY contest. Luckely my computer has been repaired, it was the power supply that failed just like I thought. Unfortenately my colleague’s computer had a broken motherboard. So after all the hardware conspiracy I thought of was just a case of coincidence. Anyway, I had to install N1MM contestlogger again and immidiatly encountered a problem. The DXcluster frequencies did not match those of my receiver, I knew I had that problem before but forgot the solution. After a few minutes of trying and making some QSOs I finally found the simple solution: in the digital interface -> setup -> Turn autoTRX Update on. Now I was finally ready to go, although it was already evening. The strange thing was it was really quiet on 20m, I mean not as crowded as usual with this kind of contest. I probabely discovered why, the 10 mtr band was wide open. I really can’t remember that I made so many 10 Mtr DX QSO since I am on HF at the end of 2005. I remember my first USA QSO in 2007, but that was with my 6 element log-per antenna on the versatower. Now, I’m only using my Alu tape vertical on a temporarely mast. What can I tell I spend most of my contesting time on 10 Mtr, it was incredible. I finally made 122 QSOs not that much as last year, about 40% were made on the 10 Mtr band. I made 16 QSOs /10 diffirent states with the USA only on 10 Mtr and that was not the best DX yet. Here some DX results:

A analysis can be found here 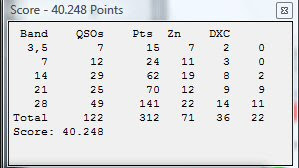