Last weekend was the weekend of the CW version of the CQ WW WPX contest. I am not a serious competitor as it isn’t really practical with attic antennas but I like to come on for the big contests to give away a few points and see what I can work. (Perhaps they should create a special category for stations with indoor antennas. 🙂 ) 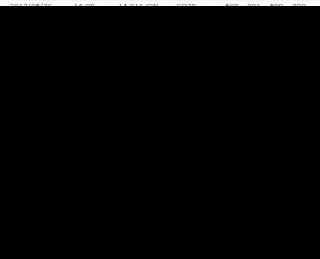 I only managed about an hour on Saturday and a couple of hours on Sunday as I easily get tired out. But I thought it would be an opportunity to put the KX3 through its paces. Although I don’t plan on sending in any more than a check log, when operating QRP I like to adhere to QRP power levels, so I limited the KX3’s output to 5 watts.

Other bloggers have written that conditions were good for the contest, but I thought they were poorer than in previous years. True, there was some activity on 10m this year. But on 20m it seemed I spent more time searching and less time pouncing than on previous occasions. And I didn’t hear any US stations at all. Perhaps I was just operating at the wrong time.

The KX3 performed superbly hooked up to KComm, my simple logging program for Elecraft transceivers. I logged 30 QSOs with 29 prefixes and 13 countries: Bulgaria, Croatia, Czech Republic, France, Germany, Italy, Latvia, Lithuania, Poland, Serbia, Slovakia, Slovenia and Ukraine. My short term memory is abominable – I forget a serial number the moment I stop to send my serial number to the other station, so I really appreciated KComm’s ability to read the text output by the KX3’s built-in Morse decoder and print it up on the screen.

So that was the CQ WW WPX CW 2012 for me. Hopefully next year I’ll be able to make a more respectable show.