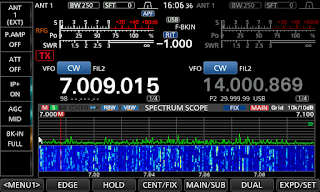 The CQ WW DX  CW contest this weekend was the first contest as VE9KK unfortunately, most of Saturday and into the evening I was not feeling well at all. I gave the contest an off and on again effort during this time. Sunday was a very late start as I wanted to get my rest to get over this bug I had.  In summary, the weekend went as follows: