CQ WPX made my day 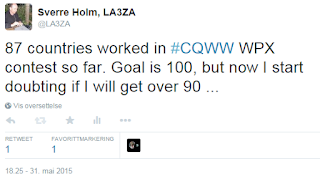 From time to time I have heard of those of who manage to contact 100 DXCC countries during one weekend. This past weekend it was my turn to try.

If you have a contest station with 1 kW and monoband yagi antennas, then this goal shouldn’t be too hard. But for my station with only an 80 m horizontal loop (loop skywire) circling its way through my garden from treetop to treetop and 100 W of transmitter power from my K3, the challenge was greater.

About 6 hours before the end of the test and with 87 countries, I had almost given up so I sent the tweet above. The status for the second day of the contest was that I had only worked two more countries. 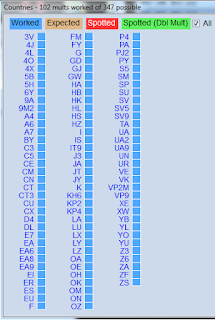 But then in the final hours I heard and then contacted Tunisia, Malaysia, Australia og Kosovo (Z6) to bring me to 91, and then Laos and Albania. But then it took a long while for some new ones: Spanish Africa (EA9) and Argentine. I also managed two more Caribbean stations (J3 and CO) and Peru and Sardinia.

Finally in the last hour of the contest two more Caribbean stations (PJ2 and VP9) and in the end Mexico 21 minutes before the end of the contest. That brought the total to 102. I think that was needed as Kosovo isn’t really an approved country and I also had contact with what was probably a pirate and not a station from Andorra. That signature was C31XR which most likely is the name of an antenna and not a real station.

My total was 47 European countries, 19 from Asia, 12 from North America, 10 from Africa, 9 from South America and 3 from Oceania. I think it helps to be in Europe as I had almost half of the countries quite close by, but it would be interesting to hear comments from North Americans on how realistic they consider this goal to be from their location.

2 Responses to “CQ WPX made my day”