12 January 2010 | by Paul Lannuier  |  Share |  Tweet |  Leave a Comment (0)
Having grown tired of 20m, I’ve been monitoring 17m during the daylight hours over the past week or so. I’ve largely ignored 17m, even back in the old days — there are only 6 DX countries in the log from New Jersey, and no US or Canadian QSOs. This must change!
The band is mostly quiet but with spurts of activity when the waterfall will light up for a minute or two before resuming room temperature. Since November I’ve logged digital QSOs with 8 DX countries and 16 states. So far all the DX has been from the south and east — EA8, F, KP4, OM, ON, PJ2, PZ, TI.
One day last week I left SuperBrowser running on 17m while I was out of the shack. When I later checked the history I saw that there were a few JAs on the list just before sunset. I filed this away for future reference. Yesterday I sat down at the rig at around 2330 UTC to do some CW listening on 40m, when I noticed it was getting dark outside. I tuned the Tarheel up to 18100 and found the band dead quiet. What the hell, I thought, might as well fire off a quick CQ before QSYing down to 40. My first call was returned by JA8GLZ on Hokkaido — my first Asian DX on 17m. With a big signal, too! (One look at his QRZ page will explain the big signal.) 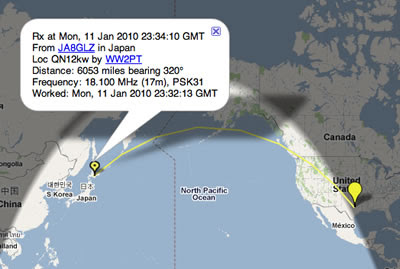 After that QSO… nothing. Not a whisper of activity. QSY to 40m…
My big issue with 17m is hearing the DX. I hear other statesiders working into EU but cannot hear the DX side, not even a trace on the waterfall. I’ve received broken responses to several CQs but have been unable to pull a callsign out of the garbled text, a sign that my Tarheel is getting a signal out but just not receiving quite as well. What to do? Perhaps a dipole in the attic? Might be a little quieter than the vertical. On the bright side, this is not exactly an ideal time to be QRV on 17, so I can anticipate better results as the days get longer and the sunspots multiply.