On this next to last weekend of “Summer” 2012, my wife Marianne suggested we take the kids down to the shore for the day.  The last time we were down there with them was when they were just babies, and they don’t even remember that trip. Since then, both Joey and Cara have learned how to swim (even though their Dad never learned) and they are both excellent swimmers.  With dangerous rip tides and undercurrents, it was a priority of ours that they be excellent swimmers before allowing them to venture into the surf.

So today, after Sunday Mass, we went down to Belmar, NJ. 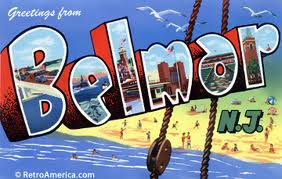 And while Marianne, Joey and Cara enjoyed the surf, I did “Dad Duty” and played sentry, watching all our “stuff” on the beach.  Not a tough job, mind you, sitting in beautiful sunshine, enjoying the salt air and sea breezes and the view.

And it’s the view that ALWAYS get me when we go anywhere near the ocean. 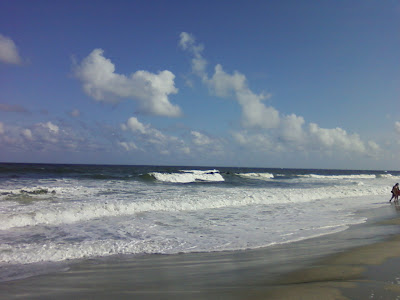 Inevitably, as a Ham, I look at the ocean differently than most folks. I look at that vast expanse of water and that flat horizon, and in my mind’s eye, I can picture the far off countries that lay on the other side of all that water. And I think of my 5 Watts of RF energy crossing all that water and reaching out to all those far away places and it just boggles my mind!

We’ve become jaded. Today’s technology – heck, the technology of the past 40 or so years has shrunken the world and we take so much for granted.  Satellites, cell phones, the Internet have all done their part to shrink vast distances and make the world seem so small.  Communications are instantaneous and we can find out about just about anything, anywhere on the globe in the blink of an eye. And now, it’s come to the point where we demand and expect that instant communication.

But then you take a trip to the ocean.  You feel the warm sand beneath your feet and the cool water lapping at your ankles and you look out upon ALL that water.  And you look, and you look and all your eye can see  is water and horizon.  And it hits you how small you are and how big this world really is.

Then you think of the QSOs – OK1DX, EA6UN, HA5AGS, D3AA, 2012L and it goes on an on. All those places on the other side of all that water – as far as the eye can see.  And those QSOs all happened with 5 Watts of power. Less power than the night light that each night illuminates the upstairs bedroom hallway in our house, zipping across that vast expanse – dits and dahs forming letters and words – making acquaintances and friends.

Awesome – truly awesome to think about it.  I can’t help but thinking that if Mr. Marconi were alive today, he would be a QRPer.  Once the airwaves were conquered, I think it would tickle him to no end to see just how far he could go with lesser and lesser power.  If anyone was thrilled by “The Magic”, it was him.

On another note, I received a nice e-mail this morning from none other than Steve WGØAT.  He included a link to a video of his 2012 Skeeter Hunt effort.

My sincere thanks to Steve and to all of you who partook in the Hunt this year.  And thank to all of you who have sent logs and summaries so far, it’s so gratifying to know that you enjoyed the Skeeter Hunt as much as I did.  The results are racking up, and very shortly after the September 12th deadline, I will make a full posting of scores, sopabox comments, photos and videos.

One Response to “Contemplating "The Magic"”