Coffee and cakes on Latrigg

For Easter Sunday, Bassenthwaite Rotary Club of which fellow WOTA enthusiast Phil M0AYB is a member put on, in aid of charity, a Felltop Café on the summit of Latrigg, a very minor but frequently visited Wainwright summit just to the north of Keswick. Phil planned to activate the summit while he was there. The opportunity to have coffee and cakes while activating a summit was too good to resist so I decided to pay Phil a visit and do my own activation. The weather played fair and was glorious, too. 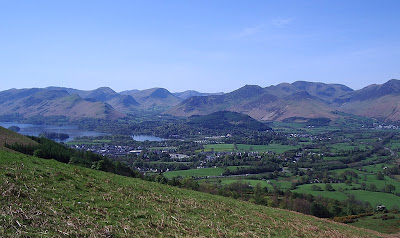 Latrigg is an easy summit – really a foothill of Skiddaw – and so it was not too much of a problem for my back which is better but still not fully recovered. The views on the way up are glorious, which is why Latrigg is a popular target for visitors to the area. 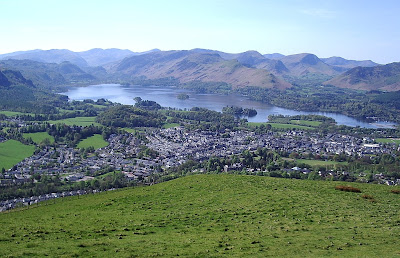 From the summit you look down to the town of Keswick, with its lake, Derwentwater, beyond.

Soon after we arrived I heard Richard G1JTD/P on Yoke in the Eastern Fells, and worked him for a summit to summit. Yoke was not a summit I’d have much hope of working from home so that was a bonus. 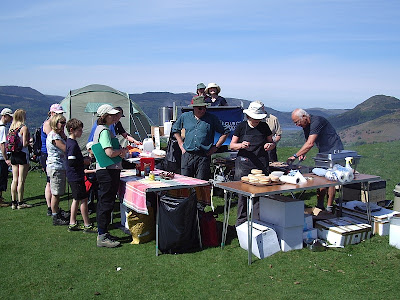 Olga and I went and got some coffee and Cumberland sausages in a bap from the café. The coffee was excellent. There was quite a queue for refreshments and I hope the enterprise made a lot of money for Bassenthwaite Rotary Club’s charity. 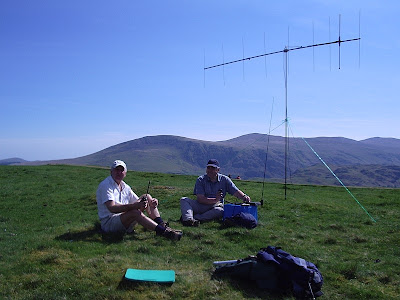 Phil had brought up a 9 element Tonna on a short mast which he was using with an FT-817 running 2.5W. I was using the Nagoya NA-767 mentioned in my previous post on comparing handheld antennas with the Kenwood TH-D72 and 5W output (though not in the picture.) I worked most of the same stations Phil had, and some of them commented that my signal was similar or close to as strong as Phil’s, which was quite gratifying.

This was the first activation I have done with the TH-D72. I have been hoping that in time I would grow to like this radio but I’m afraid it has not won me over. It’s too big and bulky and the case feels plasticky and not rugged enough to stand the knocks and bumps experienced on a summit. I still prefer the VX-8GR, though as noted in previous posts the receiver of that gets easily de-sensed in the presence of the strong signals experienced on a hilltop with a good antenna.