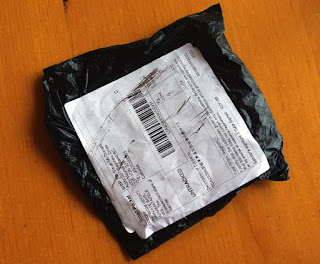 Several weeks ago I mused about my interest in earth-mode VLF experiments, following the inspirational exploits of G3XBM in his earth-mode work a few years ago.

With possible future experimenting in mind, I found a nice low-powered IC audio amplifier kit from China on e-Bay, capable of producing about 18W at 12V ... more with higher voltage and proper heat-sinking. 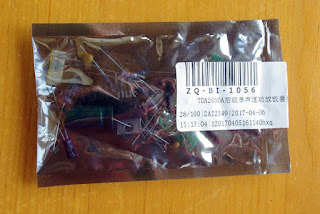 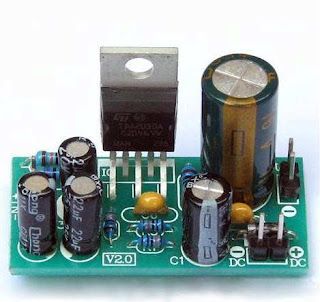 Whenever buying from China, I look for a dealer with the highest feedback rating and always compare their complaints versus the number of orders shipped. There always seems to be a few that are 99.9 - 100%, which, for me, has always assured that they are probably not selling junk. Anything lower than 98% can often be a red flag.

A few weeks after I had placed my order, the nightly TV news had a spot regarding the problem that these "free shipping" packets were creating for Canada Post and their customers. It seems that in the past few months, as more and more "free" shipments were arriving from the far east, Canada Post had not been able to keep up with the processing. The news spot showed row upon row of shipping containers parked at the back of Vancouver International's (YVR) postal processing plant, with all of them filled with thousands of small "free" packets waiting to be processed!

It seems that each packet needs to be scanned by the border security folks (CBSA) for illegal material before it can be processed by Canada Post and the back-up was building at a tremendous rate. There appears to be little if any profit for Canada Post with these smaller untracked packages and they are given the lowest priority-rating possible. 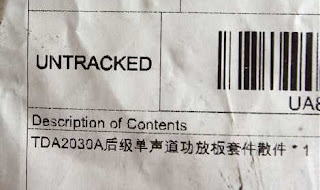 In order to speed up the process, both CBSA and Canada Post facilities would need to expand their operational capabilities at the airport and I suspect there is no serious will to do this until pressured politically by angry customers.

All parcels from China that are mailed to Canada stop at Vancouver's YVR before going further. The mammoth recent increase in online "free-shipping", in spite of the normally estimated 3-4 week delivery time, has proven too attractive for customers and our domestic system has failed to meet the new load demands.

With this new information in mind, my e-Bay purchase would prove to be an interesting test of the system and of the TV news spot's accuracy. Normally, I would have expected my tiny parcel to arrive in about 30 days, but mine would be one that eventually ended up in the airport parking lot.

The kit finally arrived this week, with a delivery time of 89 days! Many online sellers will offer an inexpensive option to pay for faster shipping, something that will still take a couple of weeks but much better than three months. If you are given this inexpensive shipping option I would highly recommend that you choose it, and if not, ask for an alternative to "free shipping". Unless something changes soon, delays will continue to increase.

I also wonder, and perhaps you can comment below, are U.S. customers seeing the same long delays as we here in Canada are experiencing when the "free shipping" option is chosen? 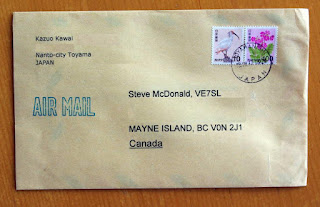 QSLs in my mailbox always excite me ... especially like yesterday's, arriving in a thin light-brown envelope decorated with colorful stamps.

I'm 100% certain this is because of receiving similar-appearing envelopes containing QSL cards during my formative years from age eleven onward and how much enjoyment the cards from shortwave stations all over the world brought me at this young age. For me, there is no replacement for a paper QSL, but sadly, this long-standing tradition is slowly slipping away due to the high cost of mailing even a normal-size envelope.

Earlier this summer I had a nice run of JA's on 6m Es but this time, instead of CW, they were on JT65A. Yesterday's card was for one of the digital contacts. 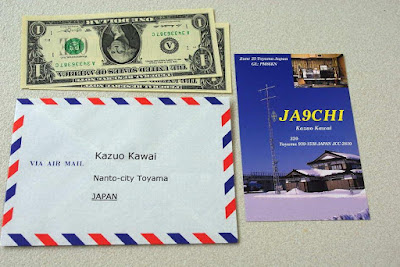 Signals were weak, at -23 db ... far too weak to be heard on CW but easily readable during the 60 second deep-listen period mandated by the JT65A mode. With so many stations now listening higher in the band for JT-mode signals, there has been very little activity on CW and now, with the introduction of yet another new digital mode, FT8, even the digital activity is split into sections, with neither mode being compatible.

I have held off installing the newer WSJT-X version containing the FT8 fifteen-second transmission mode until all of the bugs are ironed out ... the software will likely be tweaked a few more times yet before it reaches the polished final version we see for JT65 and others.

FT8 has been designed for weaker 6m Es openings that are often too short in duration for the longer time periods needed by JT65's sixty-second sequences. FT8 contacts can be completed quickly, before short-lived signals can drop out, but the shorter sequences come at the cost of reduced sensitivity ... probably a worthwhile tradeoff.

Conventional mode activity on 6m has suffered tremendously with the introduction of these new modes and it seems that if you want to work weak signal DX (and not all do), sadly it may be digital or nothing at all if the trends continue.

If all of the DX moves from CW to digital, for me, much of the magic will disappear as well. Letting the computer do all of the thinking is not nearly as satisfying or enjoyable as using my brain and CW skills to put a new rare one in the log. Six meters continues to evolve and I'm not overly excited by the direction it seems to be going.
Steve McDonald, VE7SL, is a regular contributor to AmateurRadio.com and writes from British Columbia, Canada. Contact him at [email protected].