There’s a bunch of stuff I wanted to cover today.

The first is totally unrelated to Ham Radio; but I found it fascinating.  Today, the Congressional Medal of Honor was awarded posthumously to Fr. Emil Kapaun, a Catholic priest and Army Chaplain who courageously served our country in WWII and the Korean Conflict.  He died a POW at the hands of the Chinese in North Korea.  The story of how he conducted himself as a POW and as a leader of men is, to use an overused word, awesome (in the truest sense of the word). After finishing reading the eight part story, all I could think of was “Wow!”.  Follow this link for the story about the humble, brave and holy man : http://www.kansas.com/kapaun/

Secondly – this comes from the “I ordered me one” department.  The Four State QRP Group introduced a new kit today. I immediately ordered one. It’s called the “Force Link” but is spelled 4S-Link.  It is an interface between your radio and computer for the digital modes. All you need in one totally complete kit for $40.  You can’t beat that with a stick! 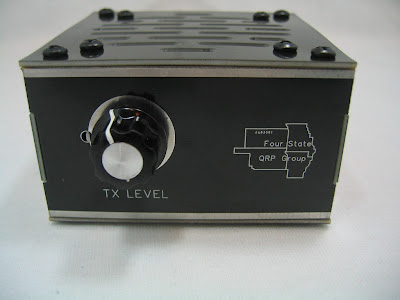 It was designed by Dave Cripe NMØS and if it’s like everything else that the Four State QRP Group offers, it will be a home run.  I would suggest ordering early before the first run gets all sold out.
Thirdly – Is it just me, or can’t anyone think of something better to do with $120.00? http://tinyurl.com/cvgkce6   Pardon me for saying so; but I have a hard time believing that this is worth it.  I could be wrong though (pssst ….. that’s been known to happen – a lot!).
Lastly, I was looking through the ARRL’s Webpage today and was looking at the list of QRP DXCC awards given out.  I was surprised that I recognized so many call signs and names.  Either I have personally worked these QRPers, or I know them from various postings to the various QRP e-mail reflectors. Here’s the list of call signs that hit my eye:
AF4LQ
AF4PS
G3YMC
HP1AC
K3NG
K3PH
K4KSR
K4PIC
K7ZYV
K8EAB
KC4ATU
KG4FSN
KU7Y
LA2MO
LA3ZA
N0UR
N2CQ
N2EI
N5DM
N6KD
N8XMS
N9AW
N0AR
VA3JFF
W0RW
W2AGN
W2JEK
W4QO
WA9ETW (listed as WA9ET – Mark, they have you listed incorrectly.)
WB2LQF (listed as WB2LQ – Stan, they have you listed incorrectly)
W0EA
I think this tallied out to be about a fifth of all the call signs listed there. I’m sure a lot of you recognize a lot of these calls too, as they are all pretty active QRPers.
Anyway, that’s it from me for tonight. I’m going to head down to the basement and see what’s what on the bands.
72 de Larry W2LJ
QRP – When you care to send the very least!
Larry Makoski, W2LJ, is a regular contributor to AmateurRadio.com and writes from New Jersey, USA. Contact him at [email protected].