28 August 2010 | by Anthony K3NG  |  Share |  Tweet |  Leave a Comment (0)
Last evening while driving from nightly target practice to a freedom rally and Constitution seminar, I listened to Glen Beck on AM radio. Much to my surprise he spent several minutes talking about amateur radio. There were some good quotes, all of which I'm taking from memory and some I may paraphrase.
Beck mentioned he has an uncle who is a ham and he's been somewhat following amateur radio for some time. He said amateur radio is a great hobby and if the "big one" ever hits, hams may be the only ones who will be able to communicate. Beck talked briefly about how to get licensed.
Beck then spoke at length about the virtues of morse code or CW "as it's known by hams". Morse code always gets through, but it will also be valuable if it becomes necessary to defend our freedoms. Many people don't like Morse code, so much so that they petitioned the FCC to outlaw it several years ago. The left despises Morse code and won't learn it because liberals are inherently lazy. This makes Morse code a perfect means of communication for conservative independent thinkers fighting for our freedoms as progressive forces won't be able to intercept messages. Beck said he thought about learning the Morse code while recovering after his last operation, but it seemed too difficult after the post-operation sedatives and painkillers wore off. 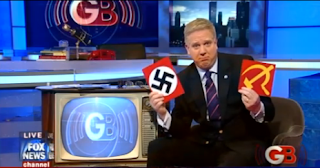 Beck later discussed an organization behind the scenes of amateur radio, the "American League", claiming that the organization, despite the name, is "quite un-American". Beck claimed to have documents describing secret meetings with an FCC official codenamed "X Par-tay". In these meetings they make crucial decisions on how amateur radio will be controlled so that the left can insure that this means of independent communications will not threaten liberal-controlled media. The "American League" organization brainwashes radio hams into sending them large sums of money and pledging their lives to the organization. Beck urged hams to demand "American League" officials show their licenses to prove they are hams. "Has anyone actually seen their ham licenses?" Beck asked emphatically. A caller mentioned that all ham licenses are in a searchable Internet database, but Beck dismissed the database as untrustworthy as it's controlled by the FCC which is in turn controlled by the government. Furthermore, Beck claimed the FCC has been telling broadcasters like him for years what they can and can't say, noting "if that isn't fascism my friends, I don't know what is". Beck called on all hams to rise up and tell the government to keep their hands off of amateur radio.  "Amateur radio spectrum should remain in the hands of the people through industry and free enterprise, and not be taxed to death." Beck exclaimed.  "In many parts of this nation, ham radios are taxed!" 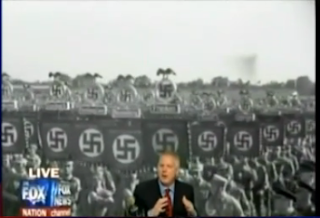 Beck went on to contrast CB radio with ham radio, calling CB a "failed big goverment experiment in socialism".  President Carter, who raised taxes, gave away radio spectrum to all citizens, hence the name citizen's band.  Hams on the other hand have to pay for their callsigns.  Beck said the government should take the spectrum and auction it off to broadcasters in the free market, estimating that the frequencies could create as many as 2,000 new radio stations in the US (40 channels times 50 states), and the proceeds could support a tax cut which would reduce the deficit and big government.  But this won't happen as it threatens liberal mainstream radio media, potentially increasing the number of conservative talk radio stations beyond its current 91% level.  Beck ended the segment by calling CB "Communist Band" and pointing out that both "Carter" and "Communism" start with the letter C.

This is a parody.  I only go to target practice once or twice before the big game hunting seasons start, everyday is a "freedom rally" here in the US, and I don't need to go to a seminar to understand the Constitution.  Glenn Beck didn't say any of the above, though it's conceivable he would if he was involved in amateur radio.  This is a hypothetical example of the fact-twisted, selective history supported, pseudo-intellectual punditry that is considered "edutainment" by some and unbiased news and information by others in the US .  Unfortunately AM radio in the US is now dominated by this sort of programming, and it's become some of the most popular programming on TV.  It's dividing our nation.


How about we restore honor to broadcasting?