Book rather than Blog 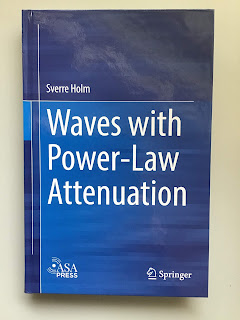 My blog has suffered in recent years and here is the reason. For three years now I have been writing a book entitled “Waves with Power-Law Attenuation”. It is now in Springer’s catalogue under classical continuum physics and I’m also very happy that it is published in the Acoustical Society of America Press series.

The emphasis is on models for waves that experience attenuation that follows a power-law in frequency. Topic-wise it is more about mechanical than electromagnetic waves, but analogies are drawn between the two fields as many of the models are the same. Power-law models in electromagnetics are in particular useful for waves in biological tissue, which is indeed also the case for acoustic and elastic waves.

The description starts like this:
“This book integrates concepts from physical acoustics with those from linear viscoelasticity and fractional linear viscoelasticity. Compressional waves and shear waves in applications such as medical ultrasound, elastography, and sediment acoustics often follow power law attenuation and dispersion laws that cannot be described with classical viscous and relaxation models. This is accompanied by temporal power laws rather than the temporal exponential responses of classical models.“