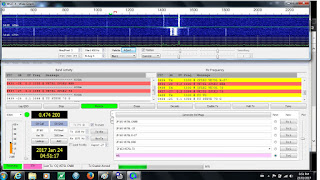 For the past year, as interest in the digital modes began to skyrocket, I have been reading the topical discussions and questions posted in the WSJT Yahoo Group.


Since the introduction of FT8, the group's daily traffic has soared and easily occupies the vast majority of inquiry.

Far and away, most questions either involve software / computer configuration problems or inquiries involving the operational use of the software itself. I am often surprised at the range of inquiry and in almost all questions involving the software itself, it just comes down to 'reading the manual' ... it seems that hams, like so many others, just don't like to read manuals and for a technically-oriented hobby, I find this peculiar. Perhaps it's because I'm just the opposite, and will usually go over instructional material, more than once, before plugging something in or installing any new software.

Not all digital modes are 'created equal' nor with the same purpose in mind and for those new to these modes or making the transition from traditional mode operations, sorting them out can often be a source of confusion. One such user broached this very topic with his recent inquiry:

I have been using JT65 and FT8 a lot, mainly on 6m DX to receive weak signals in the noise floor. QSB is acting fast there and the 15s intervals are a major advantage of FT8 to be able to complete rare contacts.
But which algorithm is better to decode weak signals in theory and practice? Do the long intervals allow the JT65 algorithm to decode weaker signals than FT8?
If both modes are equivalent is there any reason to use JT65 rather than FT8?

Bill, G4WJS, has been handling most of the technical inquiries and I thought his reply might help others that could be wondering the same thing:

... simple answer, neither wins in all situations. Each mode in WSJT-X is designed for a certain set of requirements and given those the protocol and the decoders try to optimize sensitivity and robustness.
JT65 was designed initially for EME where ultimate sensitivity was necessary and one minute T/R periods with variable bandwidths between 180Hz up to 400Hz, to cope with Doppler spreading, was deemed acceptable for practical QSOs.

FT8 is not as sensitive, a few dB behind JT65A but as you point out it is particularly suitable for multi-hop 6m Es propagation where openings can be very short. This is no surprise as it was crafted for exactly that. OTOH FT8 has become *very* popular on HF, probably because most HF QSOs do not need ultimate sensitivity and the 15s T/R period makes QSOs four times as fast compared with JT65. This last attribute is surely what is driving the massive uptake on HF on the current "easy DX" propagation bands like 20m for daylight paths and 40m for darkness paths.

JT9 was designed for HF and uses about 1/10 of the bandwidth of JT65A along with even better sensitivity. Unfortunately many users use ancient software with no JT9 support or are working through JT65 goals like WAS mode specific endorsements so JT9 does not get the attention it deserves. Although JT9 works for many on 6m, the tighter frequency tolerance required is a limitation for many with older rigs.

Both FT8 and JT65A have two pass decoders that can dig out multiple overlapping signals (similar techniques could be developed for JT9 but the need has not been seen yet).

FT8 has the AP decoder which gets a couple of dB extra sensitivity for critical decodes and also helps with truncated or interrupted messages in some cases.

WSPR is a pseudo beacon mode that uses a short message and two minute T/R period that has greater sensitivity than even JT9 despite the signal being only 6Hz wide. WSPR like JT65A and FT8 uses a two pass decoder capable of decoding overlapping signals.

There is also MSK144, QRA64, JT4, the fast versions of JT9, ISCAT, FreqCal and Echo mode. Each with a specific purpose and maybe for other opportunities they were not initially designed for.

For myself, I have yet to download the latest WSJT-X release, as I presently have no need, nor see the need to use FT8. To utilize the new release, I think I'll need to delete my older (pre-FT8) version, in order to avoid file confliction problems. My older version works very well for what I do need, and that is JT9. There are a few features on the software that I also find handy, which have been removed in the newer versions ... I think.
I can however, visualize losing out on some great DX opportunities on 6m during the summer, if the huge exodus from the CW DX mode to the FT8 mode continues to escalate. I really hate the idea of this happening but if that's what it takes, I'll install the FT8 version on my small contest-logging laptop which means building a new interface to run the 756PROIII on FT8.

Of course there is always the possibility that the trend will reverse as many eventually find that FT8 contacts are not all that interesting. The inability to exchange anything other than minimal required QSO information is the price paid for that extra sensitivity ... fine for that once in awhile new one in the log but not very satisfying for everyday communications.

The 'reversing trend' was also addressed in a recent posting to the WSJT Yahoo Group:

In my opinion it is nice to see a steady return to JT65 & JT9.
An all round better mode.
Still a bit short on the DX stations but I am sure they will follow soon.

Pretty much what a lot of us said would happen: an initial surge to FT8 and then things would settle down. Just another tool in the toolbox that does not have to be “better” or “worse” than anything else that has a few advantages over some modes in some areas (Es, for example) and disadvantages over others. None of these modes has to be classified as “good,” “bad,” “better,” “worse,” etc just like I don’t consider a screwdriver “better” overall than a hammer but each tool does a different thing. I suppose it’s human nature to attempt to classify things that way.
I have also seen some confusion when some are describing WSPR 'QSOs'. This is disturbing since there can never be a two-way exchange of information, all via radio (a QSO) using the one-way WSPR beacon-mode. Some may be confusing 'WSPR QSO's' for the actual Weak-Signal two-way 'WSPR QSO'  modes such as JT65, JT9, FT8 etc.

Since WSPR relies on an internet back-channel exchange of information (to see where you've been heard), there is no actual on-air exchange of the data needed to claim a legitimate contact. To make such a claim would be no different than two stations, each running a beacon and calling each other up on the telephone to say that they can hear each other and calling it a two-way 'QSO'!

I have been using, and will continue to use JT9 on the new 630m band where signal levels are often too marginal for CW work but easily handled with this digital QSO mode ... otherwise I'll keep pounding brass whenever I can!
Steve McDonald, VE7SL, is a regular contributor to AmateurRadio.com and writes from British Columbia, Canada. Contact him at [email protected].