As mentioned in one of my last posts, the lithium ion battery that I had acquired from eBay arrived. There was a “return receipt, signature confirmation” slip in the mail box and I went and picked it up from the Post Office this morning.

Batteries sure are getting lighter and smaller! 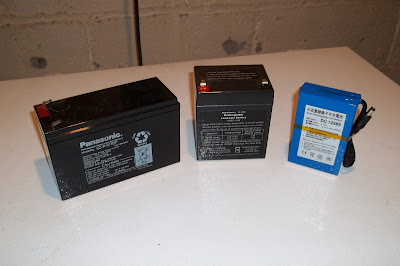 The battery to the left is the very first sealed lead acid battery that I’ve ever used for portable field operations.  I’ve had this guy for about eight years now.  It’s a 7.2Ah battery, probably about 5 pounds (a tad more than 2 kilos)- about the weight of a bag of sugar (roughly). It came out of an emergency EXIT light that was in the building that I used to work at.  I saved it from the dumpster and there was (and still is) absolutely nothing wrong with it. Only drawback for field operations is the weight.

The middle battery is the one I’ve been using for about the last three years. It’s rated at 5Ah and is roughly half the weight of the big battery (approx. 2.5 pounds or about 1 kilo).

“Little Boy Blue” to the extreme right is the lithium ion battery. 9.8Ah and I would say, the same size as a pack of cigarettes.  It weighs less than a pound (less than 1/2 a kilo).  It came with a wall wart (not pictured) for charging, it has both male and female 3.5mm connectors for output; and it has a little switch on the left hand side with a tiny red LED indicator to let you know you have turned the battery “on”.

More capacity in a smaller, lighter package.  How cool is that?