Following the success of the Wouxun radios, we have a new Chinese handheld transceiver that has many hams excited – the Baofeng UV-3R. The UV-3R is a dual band (UHF/VHF) 2W “micro” transceiver manufactured by Vero Global Telecom and sold by Baofeng. While the Baofeng brand is the most popular, the radio is also sold as the Comtex UV-3R, the Magiksu UV-3R, and the Zastone ZT-UV3R. (Baofeng also sells the UV-100 and UV-200 models that share common internals with the UV-3R, but have some cosmetic differences. Also, on ebay.com you can find speaker mics for these models that are unavailable for the UV-3R.) One reason the UV-3R is so popular is its relatively low price – less than $50 via ebay and slightly more from the US suppliers. At this price and small form factor, it makes a great back-up radio to keep in a truck glove box or a laptop bag.

Cosmetically, the UV-3R is very similar to the Yaesu VX-3R. 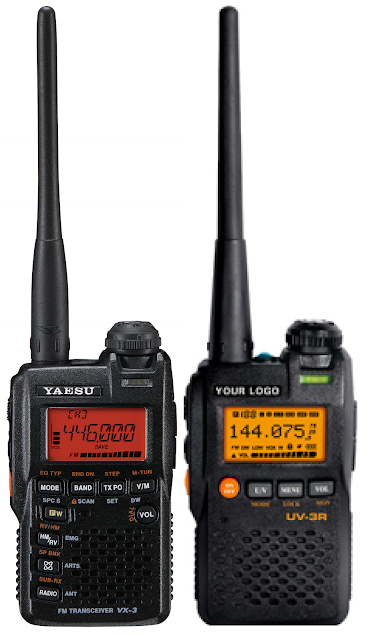 The dimensions are the same, but the UV-3R is missing a few buttons on the front panel and the functions of the duplicate buttons are not the same as the VX-3R.  The UV-3R, in the fine tradition of Chinese radios, adds an LED flashlight. The radio also is available in red, yellow, blue, and camouflage in addition to the standard black. When holding both the Yaesu and Baofeng in my hand, it is easy to see and feel the superior quality of the Japanese radio. 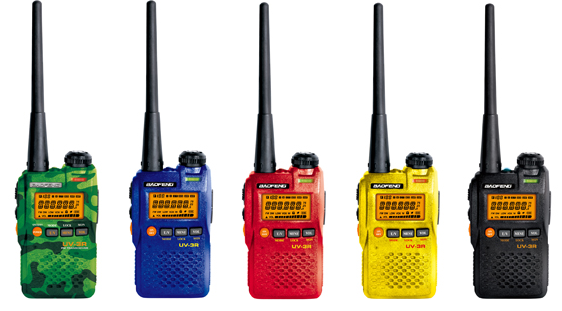 A quick review of the technical specifications reveals that this radio is dramatically different from the VX-3R. The UV-3R is a 2M/440 MHz transceiver and FM broadcast receiver. An abbreviated list of its features/functions/specs is below. (A full list can be found here.) The radio is built by levering the power of the RDA1846 by RDA Microelectronics. This single transceiver chip provides most of the radio functionality – essentially making it a SDR.

Early adopters were “treated” to a version that appeared to be rushed to market – the units only had twelve menu options, the s-meter was worthless, and it came in a rather plain box. The subsequent version added six more menu options, improved the signal meter, and now comes in a more polished box.

The menu options are:

In addition to the cost and size, hams give the UV-3R favorable reports for both transmitted and received audio. On July 20, 2011, the UV-3R became Type 90 accepted by the FCC. The FCC documents can be found here.

The UV-3R is easy to use in spite of a somewhat confusing manual. ZL2GVA mitigated that short-coming by releasing an easy to use cheat-sheet.  While most folks find it easy to program the memories from the radio itself, the UV-3R can be programmed from a computer using a USB cable and software from Baofeng. In addition to the factory software, the UV-3R is also supported by the CHIRP cross radio programming application. (CHRIP may not program all features for all radios; it is intended to allow hams to transfer memories from one device to another with little effort.)

In addition to the USB programming cable, the radio has several accessories. It comes with the manual, charger, a charger adaptor (if needed), a charging stand, wrist strap, an UHF antenna, a VHF antenna, an ear bud/mic combo, and a belt clip. The shorter antenna (with a red ring) is for UHF. The longer antenna is for VHF. The UV-3R requires an antenna with a SMA-M connector. The antennas perform well, but many folks have wished for a dual band antenna. The Nagoya NA-701 and Nagoya NA-666 both seem to be popular choices. The antenna connector is fairly close to the LED, so some trimming may have to be done to get a good fit.

Car chargers, cases, and the USB programming cable are available as options or sometimes included as a bundle with the radio. The battery is a common NP-60 (FUJI compatible), so picking up an extra one is easy to do. Also, with a slight modification to account for the belt clip mount, the AA battery pack (FBA-37) for the Yaesu VX-3R can be used to run the UV-3R. For me, the car charger and the AA battery pack are the must have accessories for the UV-3R in its role as a backup radio.

The radio is not without some minor problems and quirks. For example, one oddity is that it uses the less common negative tip for the power plug. As for the problems, hams have reported issues with fit and finish – specifically plugs/sockets that result in loose connections. If pushing the plug with all your might doesn’t work, then try backing it out a little. Also, hams have found spurious emissions on harmonic frequencies.  There was a lot of debate about the severity of this issue on the UV-3R Yahoo group – bench vs. real world, letter vs. spirit of the FCC regulations, Type 90 Acceptance impact, etc. Whatever the severity of the emissions, it did not prevent the UV-3R from meeting the requirements of the FCC. Another common complaint was with the loud receive volume. Even at the lowest setting, the radio is quite loud. For that reason, I don’t like using it where it will bother others.

One of the advantages of an inexpensive radio is that you don’t risk much when trying to modify it. Disassembly mostly involves removing screws, but you will have to unsolder the antenna connector. Two mods seem to be the most common as they address some of the issues mentioned above. The first adds a capacitor to reduce spurious emissions on the harmonics.  The second also involves adding a capacitor to reduce the loud receive volume issue.  More frivolous mods include turning the LCD blue – but then you can have a blue radio with a blue screen.

For me, this little radio has provided a great learning experience as well as a good value for my money. It may not be the best radio ever, but the price, size, and overall good performance make it a good choice for backup radio or even one for a new ham to get on the air. It also has been interesting to see:

Credit goes to a lot of the guys on the UV-3R Yahoo group  – I don’t have the knowledge, tools, or time to do a lot of the research/testing/playing that they have done. I highly recommend the Yahoo group – although it has now reached a point where a lot of the same questions are being asked.

Editor’s note: I personally follow Brick’s blog and find it very worthwhile. While not all content is Amateur Radio related, I encourage you to check it out. -Matt W1MST

Brick O’Lore wrote this guest post and blogs regularly about a variety of topics at http://www.brickolore.com. Contact him at [email protected].