Back up on my captcha soap box 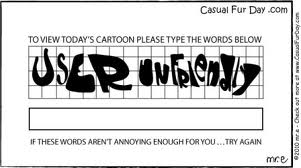 Some time ago I blogged about the Captcha's one would have to deal with when trying to leave a comment on some blogs.  Over time Captcha's have changed and not for the better. I can remember when they were simple......a pain but still simple to solve. Then I guess cyber bots became smarter so the Captcha's  became harder!!  The new Captcha's had a "wave" to them along with upper and lower case letters. Then as fate would have it the dam bot's did it again became somehow smarter....the Captcha's then had an UNCOOL way of blending their letters together and burring them to boot, oh and lets add numbers now too.
So my latest Captcha rant is......this week I was going to post a comment on a blog and on the comment page it contained the Captcha  along with the comment box. There was the blur, the wave and numbers as usual so I filled in the maze and then added my comment. I proceeded to hit the post button I was then informed my Captcha attempt did not match....surprise surprise!! I was instructed to hit the back button and try again. To my surprise my comment was gone and I had to start all over again!!! Is this the NEW Capthca....mess up and your punishment is to start all over again. I guess from now on I am going to  have to add but another step to my comment process, highlight and copy the comment in case I am punished and have to start again and maybe again and again....you get the idea.
I am stepping off my soapbox now........thank you.

7 Responses to “Back up on my captcha soap box”