I need a new office notebook. Yesterday, while working on something a thin bright blue vertical line appeared on the screen. It’s still there this morning. I guess the TFT display is going on the fritz. Well, this Toshiba Satellite M60 is 4 1/2 years old and has been in heavy use 10 hours a day 5 days a week for nearly all that time, so I can’t complain. Time for a replacement. The trouble is, I use Linux on my work PC and it doesn’t seem to be possible to buy a high-spec laptop with Linux ready installed and working on it. 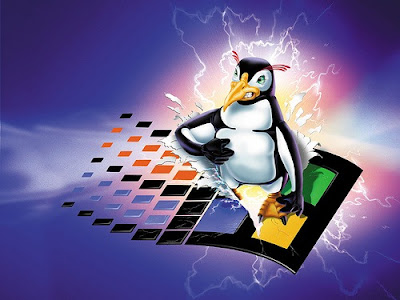 Obviously, I’d like to avoid paying for a copy of Windows I’m not going to use. If you’ve ever seen it on sale, you’ll know that the cost of a copy of Windows is quite substantial. Since, thanks to Microsoft’s obsessive copy protection, it will be an OEM copy locked to the hardware and without installation media I won’t even be able to install and use this copy under VirtualBox if I want to.

But also, as it’s a work machine, I’d like to buy one on which the operating system is supported and all the hardware works with it. I’ve installed operating systems far too many times in my life to have any enthusiasm for doing it one more time, and I know from experience that laptops often contain hardware that isn’t supported out of the box by Linux.

When we bought a new laptop for Olga a couple of years ago I bought a budget HP laptop that came with Windows Vista – which ran so slowly it took two hours just to finish it’s automated initial setup routine. I installed Linux but had an anxious couple of hours as I couldn’t get the wi-fi adapter to be recognized. I did in the end, and the chances are that any problems with whatever system I got this time could be resolved after hours of ferreting through support forums. But that long ago ceased being fun and I would really prefer to avoid it.

However, it is virtually impossible to buy a PC or laptop with Linux installed and supported. Dell appears to offer a small selection of laptops preinstalled with a long superseded version of Ubuntu. There is also a firm called The Linux Emporium that offers a limited range of Lenovo laptops with Ubuntu installed on them. But they have nothing that meets my spec. This old Toshiba has a 17in display with WGXA+ 1440×900 resolution and I’m not going to settle for anything smaller. So it seems the only way I am going to get what I want is to buy the laptop I want, pay the Microsoft Tax, throw away Windows and do my own Linux installation.

Is it any wonder that Microsoft enjoys such a virtual monopoly when people who buy PCs don’t even know there is an alternative? Why hasn’t the EU done something about this? It has taken months and cost millions to force Microsoft to install a screen that lets people choose what web browser to use, despite the fact that a) the browser market already has healthy competition and b) switching browsers later on if you want to isn’t a problem. But it has done nothing about a situation that forces people to pay for a Microsoft operating system even if they know enough not to want one. Even if computer manufacturers don’t want to offer Linux because they don’t wish to support it, they should at least be required to offer the OS as an optional extra so those who don’t want it don’t have to pay for it.