Sunday was a fine but cold autumn day and Olga and I went for a walk near Loweswater. In my rucksack I took the Motorola GP300 and the FoxTrak APRS tracker. This is a somewhat more bulky arrangement than using the VX-8GR, however this hobby has for me always been more about providing a reason to build and tinker about with stuff than using the latest, most efficient technology and using this home-built tracker with a radio I bought for £1 at a rally is just somehow more fun than using Yaesu’s latest gadget. 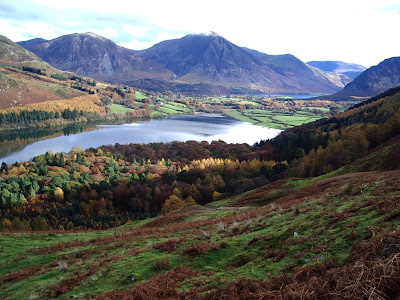 I had obtained a cable for the Motorola with the correct two-pin plug to make up an interface. I cut the tip off the 3.5mm jack so that inserting the plug did not cut off the speaker and I programmed a channel on the radio with 144.800 as the transmit frequency and 145.500 as the receive frequency. This meant that I could hear anyone calling CQ during the periods between transmitting position beacons. The downside is that the FoxTrak cannot tell if the APRS frequency is clear before transmitting. But many dumb trackers do that already because they don’t have a receiver. In any case, the APRS activity level here is so low that the chances of a collision occurring are about the same as winning the lottery.

Although the path we walked along was quite high, this was not a very good location for radio. Only one position beacon was received by a gateway and I made just one voice contact – with Phil M0AYB/P activating the summit of Blencathra for WOTA. (Phil later went on to activate Mungrisdale Common which completed activations of all of Wainwright’s Northern Fells. I’m doubly sorry to have missed contacting him there, but congratulations Phil on the achievement.) 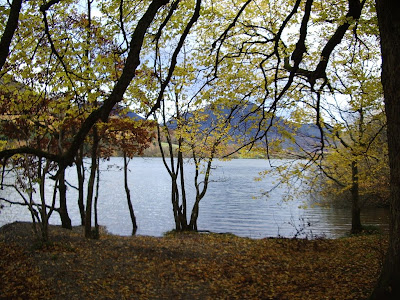 Our walk took us down through the woods to the lake shore and then back to the car. The autumn colours were wonderful – my pictures don’t really do justice to them. I expect most of the leaves have now gone. Last night there was a gale and this morning through the overcast we could see wet snow on the mountains down to quite a low altitude. I doubt that there will be many more opportunities for a walk like this before the end of the year.