13 August 2015 | by Dan MØTGN  |  Share |  Tweet |  Leave a Comment (1)
A few days have past since I last blogged about the CW decoder. Since then I moved the project forward and created a Vero version which worked well. It was based on the idea of a shield and plugged in on the top of the Arduino UNO. I added a reset switch,  and tried the kit using a Adafruit Mic amp. Adding this – I needed to expose the 3.3v  to the microphone, and in doing so I created a really great little piece of kit. At this stage I was formulating what I wanted the finished kit to consist of. And here is a breakdown of my immediate requirements :

1. Line in or Microphone input
2. Easy to read display – all boxed neatly
3. An LED that shows the Zero beat
4. Easily accessible Reset Switch
5. Powered from a 12v supply.

I did want to create a usable PCB, something that could be used by a student or someone wanting to build the kit. So using the Fritzing application I set about laying out a circuit board. 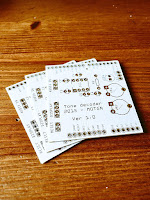 This was my very first attempt at creating a PCB , so nerves were a wee bit on the tense side. I also wanted to box the project, so my rationale was to find a box first to work out the physical dimensions of the finished project.

As with the Vero Version – I created a layout that would fit on top of the UNO.

After submitting the design, and waiting a week I managed to get hold of 3 boards. They looked awesome. All white and exactly how I laid them out.

I did make 2 small errors on these boards. The first issue was sitting the capacitors a bit too close to the LM567 IC. That is an easy fix for the next version. But the 2nd and more serious issue is I forgot to ground 2 caps. They were floating and in parallel. I did fix this by attaching a wire to ground from one of the caps. That solved the issue, and I have already corrected the fault for the next batch of boards.

2 further observations of the boards & the project as a whole have highlighted 2 further improvements to the project.  The location of the pins for the display / reset switch and audio OUT should be on the other side of the board. That would make a far better layout.  Also adding in an audio oscillator / switch & plug to insert a key on the oscillator – then feed the output to the Arduino would immediately mean this kit could be used as a practice oscillator too. – that would show the letters as you transmit them out.

So here is a review of the project so far, and what I intend to do with the project going forward.